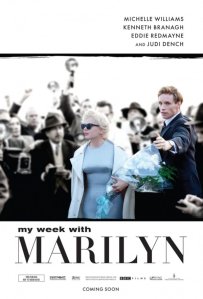 Review: “My Week with Marilyn”

“MY WEEK WITH Marilyn” – not to mention this year’s Oscar for Best Actress – belong to Michelle Williams (“Blue Valentine,” “Brokeback Mountain”) for her luminous embodiment of Marilyn Monroe or, as she was known in 1956 (the year in which Simon Curtis’s new film is set): Mrs. Marilyn Miller.  That was the year of Marilyn’s third marriage, this time to playwright Arthur Miller, which was a significant victory for American eggheads since the century’s greatest sex symbol had left Yankee Joe DiMaggio for the author of Death of a Salesman and The Crucible.  It was also the year in which Monroe crossed the pond to costar with Britain’s leading Shakespearean actor, Laurence Olivier, in “The Prince and the Showgirl.”  In many ways Olivier’s heir, Kenneth Branagh plays the great thespian, disappointed and angered by Marilyn’s ineptitude on set.  It’s the ultimate clash between English modesty and American super-stardom, and exasperated by Monroe’s acting coach (Zoë Wanamaker) and her many lapdogs, he barks: “Teaching Marilyn to act is like teaching Urdu to a badger!”  Olivier is gruff, arrogant, caked in makeup, and when he drops an F-bomb upon Marilyn entering the room, she asks in her characteristic breathiness: “Oh, they have that word in England, too?”

Based on his memoirs The Prince, The Showgirl and Me and My Week with Marilyn, both by British filmmaker Colin Clark, the film follows a 23-year old Colin, recently hired as a third assistant director on Olivier’s picture.  As Colin, freckle-faced Eddie Redmayne (“The Good Shepherd,” “Savage Grace”) goes all weak-in-the-knees upon meeting the bombshell though he quickly becomes something more to her, both the shoulder-to-cry-on as she feuds with Miller and yet another man whose erotic veneration Monroe needed as badly as the air she breathed.  Apart from Colin, the only other Brit pleasant to her on set is Dame Sybil Thorndike (played by another Dame, Judi Dench), who speaks to the film’s major conceit – the paradoxical pleasure and pain of unrequited love – when she tells Colin “First love is such sweet despair.”

suited to the both the source material, “The Prince and the Showgirl,” and the fact that Marilyn let Colin close but not too close.  A splendid scene follows an off-set excursion to Windsor Castle where Colin’s godfather, Sir Owen (Derek Jacobi), provides the pair with a private tour of the royal family’s library.  Once skinny-dipping ensues, director of photography Ben Smithard (“The Damned United”) lingers over their bodies with suitable sparkle and softness.  To reach that Marilyn-like glow, Williams reportedly required three hours of hair and makeup each morning and it shows: she radiates but also breaks your heart. “My Week with Marilyn” transcends verisimilitude to dramatize the fact that Marilyn’s off-screen role was just as laborious and ill-fitting as her onscreen persona; we get the sense that she’s trapped by expectations as sound stage bells ring and crazed fans crush in around her.  After a lovelorn week, Marilyn moves in close to Colin for a final kiss, whispers the line “Thanks for being on my side,” but after that, it’s goodbye Norma Jean.