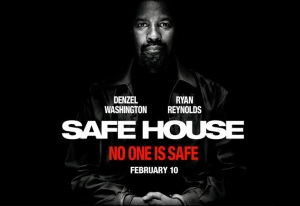 TO SAY THAT “Safe House” moves at breakneck speed is an apt description given one dazzling sequence in which rogue CIA operative Tobin Frost (played with great aplomb by Denzel Washington) escapes a BMW’s trunk, through the backseat, only to strangle the car’s driver, fellow agent Ryan Reynolds, from behind.  The unrelenting action of “Safe House,” expertly choreographed by Swedish director Daniel Espinosa, makes the film more unstoppable than Washington’s last film, “Unstoppable,” more full of bullets ricocheting than his “Ricochet” of 1991.  “Safe House” barely slows down to catch its breath and when it does, it’s aided by a strong cast including Vera Farmiga, Sam Shepard, and Brendan Gleeson, all of whom demonize Frost for going, as they put it, “off the res.”

Frost’s first line in the film, “This is not a negotiation,” along with the remarkable deftness with which he pulls of a high-stakes operation, alerts us to his steely, sociopathic nature.  Intermittently captured, then lost, by Reynold’s character Matt Weston, Frost is a supreme source of mystery: like a Dr. Lecter, he uses his psychological acumen to get under Weston’s skin with a probing I’m-just-like-you/you’re-just-like-me approach.   The CIA, meanwhile, describes him as a “notorious” and “expert manipulator of human assets,” but we’re not sure why.  Only later in “Safe House” do we realize our alliances are misguided, thereby proving another of Frost’s aphorisms, which he imparts to Weston: “Everyone betrays everyone.” The relationship between the two men, which begins as a simple cat-and-mouse pursuit but develops into something deeper, unfolds in a Bourne-like world in which political espionage and double-crosses collide.  In fact, David Guggenheim’s script is well served by editor Richard Pearson (“The Bourne Supremacy”) who juggles multiple scenes like he’s spinning plates.

There are some minor improbabilities in “Safe House” that catalyze the

action but make no real sense.  Why would the CIA dispatch Weston, for example, to a crowded sports arena to pick up a GPS device when all hell can, and does, break loose with a wily Frost in custody?  Are there no quiet spots, like a Mailbox Etc., in Cape Town?  Does it really take more than 24 hours for the brass in Langley, Virginia to catch a flight to South Africa and help out the flailing Weston with Public Enemy #1?

Then again, it’s all about the action in “Safe House,” which crashes into you with shoot-outs, screaming mobs, sniper fire, and a veritable bloodbath that sends Reynolds flying through windshields and windows, all of which make it safe to say that “Safe House” is the first true action film of 2012.