“Teenagers on the Verge of A Nervous Breakdown”

SOMETIMES WISE, SOMETIMES FUNNY, always infuriating, “The Perks of Being a

Wallflower” is only a semi-success.  The source material is Stephen Chbosky’s eponymous coming-of-age novel, published in 1999 and adapted-directed by the author himself for the screen.  The film version of “The Perks” isn’t just a drama of adolescent angst but a retro playlist that, stuffed with Crowded House, The Smiths, and Cracker, alerts us to the film’s setting: Pittsburgh in the early Nineties.  Chbosky’s adaptation is a schizophrenic affair, however: admirably, it doesn’t shy away from the messiness of teenage sexuality, love and longing and yet many of its moment are so precious that they practically demand a collective “Aww” from the audience.  It’s a relief to not see much of the parents in “The Perks” though the kids, wise beyond their years, are too much like adults for the film to really strike a chord.  They’re already looking back. 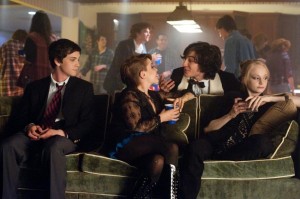 Our protagonist is Charlie (Logan Lerman), a burgeoning writer and nerdlet who has placed in Advanced English under the tutelage of Paul Rudd as a high school teacher supplying this freshman with Salinger and words of wisdom.  Charlie has survived two traumas: the suicide of his best friend and the  death of his aunt (Melanie Lynskey), which he may or may not have caused.  Flashbacks of that time  – a sure sign that a book is being compressed into film – swim in and out of focus.  After seeing an outlandish and openly gay upperclassman named Patrick act out in shop class, Charlie develops a fascination with his classmate and even scoots closer to him at a football game to introduce himself.  Enter Samantha as the third musketeer; she is played by a pixie-ish Emma Watson who has left Hogwarts behind for her first adult leading role only to be upstaged by Ezra Miller as stepbrother Patrick.  (Miller made our blood run cold as the sociopathic Kevin in last year’s “We Need to Talk About Kevin,” and he proves once again to be a fearless and funny scene-stealer.)  Patrick has been carrying on a secret relationship with a closeted quarterback and Sam has a reputation of sorts.  They welcome Charlie to what they describe as their “island of misfit toys.”

togethers and traditions are completely implausible.  Since when do high schoolers host Christmas parties only to exchange presents like antique typewriters and men’s suits?  Sam and Patrick say things like “It’s rock and roll!” and, taking over the school dance to bust a move to “Come on Eileen,” Patrick reels: “This is what fun looks like!”  The line lands with a thud only because American teenagers haven’t said such things without irony since they wore poodle-skirts and tuned in for “My Three Sons.”  The Nineties were never this nice.  Chbosky smartly undercuts such phony sentimentality at key moments, like when Charlie abruptly tells Sam that his friend shot himself or when he discovers Patrick and the quarterback kissing in an upstairs room, but like any act of nostalgia, “The Perks” is closer to how one might want to remember high school rather than the actual experience.  The Eucharist melts into a hit of LSD; Charlie is given pot brownies and admits he’s “baked like a cake.”  This is the stuff of real adolescence rather than the stuff that dreams are made of.  Less floweriness, more ferocity.

5 thoughts on “Review: “The Perks of Being a Wallflower””