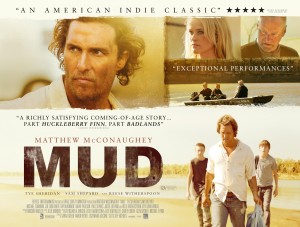 “Mississippi Moon, Won’t You Keep On Shinin’ On Me”

MARK TWAIN NEVER forgot the Mississippi.  In 1856, he left Ohio for Louisiana by steamboat, intending to travel on the Amazon.  Fortunately, Twain changed his mind and apprenticed for a Mississippi riverboat pilot and the rest is (American literary) history.  “The great Mississippi, the majestic, the magnificent Mississippi, rolling its mile-wide tide along, shining in the sun,” he wrote in one of his earliest sketches about that river.  Twain would no doubt have found the new film “Mud” from Jeff Nichols – who reportedly asked his cast to read the author while on set – a marvel, rich as it is with local color, narrative density, and feeling.  It’s full steam ahead for Nichols, whose previous films include the little masterpieces, “Shotgun Stories” (2007) and “Take Shelter” (2011).

woods and streams anymore – there are apps for that now – which is why the boys’ backwoods existence evokes a golden age when childhood was the closest thing to freedom.  Ellis and Neckbone discover a remote island with a boat inexplicably wedged in the treetops up high. There’s a well-executed panning shot – compliments of director of photography Adam Stone – in which the boys first encounter the island’s sole inhabitant, a stranger with an even stranger name: Mud (Matthew McConaughey, in his best starring role to date).  Mud’s too amicable and avuncular to be dangerous – Ellis takes an immediate liking to him – and for a while, the boys shuttle between their families (played by Ray McKinnon and Sarah Paulson as Ellis’s feuding parents) and ornery neighbor Tom Blakenship (a buzz-cut Sam Shepard), bringing Mud the canned food he needs to survive on the lam. Michael Shannon, the star of Nichols’ previous films, is Neckbone’s guardian, Uncle Galen; he’s busy scouring the river bottom for oysters and banging around in the equipment of a deep-sea diver.

But no man, of course, is an island, and Mud’s criminal past connects the boys to a whole host of problems in their tiny Arkansas town.  Mud’s back story is a romantic one: he’s killed the Texas lover of his on-again-off-again girlfriend named Juniper

(Reese Witherspoon) who has brought him nothing but trouble.  Driven by what Toni Morrison calls one of those “deepdown, spooky loves” that make one “so sad and happy,” Mud and Juniper are the kind of couple that send restraining-orders as love-notes.  Tom Blakenship blames all of Mud’s trouble on Juniper and, as a ex-military sharpshooter, he comes in handy when the father of Mud’s victim (Joe Don Baker) brings a bunch of hired guns to town to track Mud down.  It’s all in the nonverbal dialogue when Juniper spots Mud (temporarily off the island) from the balcony of her run-down motel; it’s Nichols’ riff on “Romeo and Juliet” with the same collision of eros and violence.

Gender politics, as usual, muddy the waters and the script’s only failure is that its conflicted relation to women and femininity feels, well, Twain-era. It becomes clear that Ellis and Mud are leading parallel lives, for the Huck-like Ellis is crushing on an older girl named May Pearl (Bonnie Sturdivant) who breaks his heart in the way Juniper

breaks Mud’s over and over again. Because Ellis’s father is estranged from his mother (the underrated Paulson), he warns his son that all women are snakes, selfish and impossible to please.  “Mud” doesn’t really disavow Ellis (or the audience) of that biblical bunk except for Mud’s corrective, which comes later in the moments before a river-boat shoot-out.  Mud assures the boy that women are worth loving, but is “Mud” really on board?  The film’s women remain archetypal and far-off.

Mud’s island, meanwhile, is a wondrous place; it’s the ultimate man-cave wherein he’s planning his escape by river but also a dangerous place replete with a hissing snake pit (foreshadowed well from the film’s start).  Nichols’ “Mud” is that rare work of art that achieves something tantamount to Twain’s best stories (for adults and children): it reminds you, simultaneously, of what it was like to be a child but also what it’s like to feel – however incompletely – all grown-up.

CHANNING TATUM’S NIPPLES appear on screen a split-second before the rest of his body as he slides from a crumpled bed in which not one but two ladies lay felled from the night before.  These are the first indications that Steven Soderbergh’s new film “Magic Mike” is immersed in the body electric.  How could it not?  The narrative centers around an ambitious male stripper in Tampa, Florida who takes a college dropout named Adam (Alex Pettyfer) under his wing and onto the catwalk.  (Tatum was born to play this role, literally: penned by his production partner Reid Carolin, the dramedy is inspired by the actor’s own experience as a stripper in the Sunshine State.  Since that time, Tatum has been busy making tepid movies like “The Eagle” and “The Vow,” but here, he holds his own with newfound, leading-man likability.)

The real revelation of “Magic Mike” isn’t Tatum, however, nor is it Pettyfer, or even a repitilian Matthew McConaughey as club-owner Dallas, but newcomer Cody Horn as Adam’s sister, Brooke, who provides her brother with a sofa to sleep on while he learns the ropes at Club Xquisite.  “I don’t judge him, I love him,” she tells Mike.  Horn brings some much-needed sarcasm and gravitas to “Magic Mike,” which is skin-deep in terms of character and plotting.  Anyone familiar with the best (and worst) of hooker-with-a-heart-of-gold tales like “Showgirls” and “Breakfast at Tiffany’s” (not to mention “Klute,” “Boogie Nights,” and “Detachment”) will know that Adam will have to get knocked down before he gets up again.  There is a sweetness to Pettyfer’s naivete, especially when, wide-eyed, he remarks to Mike after a wild night out: “I think we should be best friends.”

The banal title notwithstanding, “Magic Mike” is elevated by Soderbergh’s Midas touch; in keeping with “Contagion,” the film is lit in

tawny, almost sepia, colors except for when the dancers at Xquisite are gyrating in tear-away chaps and thongs.  Still, from the director of “Sex Lies and Videotape,” “Magic Mike” is surprisingly chaste; it could be the first unsexy movie about male dancers and the libidinal ladies they drive wild.  Amongst those admirers is adult movie star Sasha Grey (no link provided!).  If only “Magic Mike” had gone the full monty and thought of Dirk Diggler as its sleazy muse.

Regardless, audiences don’t seem to mind much.  Otherwise known as “the stripper movie,” “Magic Mike” raked in 39.2 million dollars during its opening weekend, a record for an R-rated film, and it cost just seven million to make.  That’s an awful lot of singles.

THERE ARE ONLY a handful of comic actors, Woody Allen and Jim Carrey included, who elicit laughter through the sheer power of body language.  Jack Black is certainly amongst those funnymen and, as the eponymous Bernie, with his high belt-line and caterpillar mustache, he resembles a plus-size Robert Goulet.  Beloved by his Texan townsmen, he belts out gospel tunes and dons a sparkling white bandleader outfit in a local production of “The Music Man.”  You won’t see a funnier image this year than that of Black and steel magnolia Shirley MacLaine riding together on a tandem bike.  You also won’t see a better batch of black comedy than “Bernie” this year.

Inspired by a true crime in the East Texas town of Carthage (population 6,500), “Bernie” uses a mockumentary-style to narrate the story of a popular funeral director, Bernie Tiede, who wooed and wed an old widow before shooting her four times in the back with a gun used to kill armadillos in her garden.  Working from an article by Skip Hollandsworth, director Richard Linklater (“Dazed and Confused,” “School of Rock”) sets the morbid mood by opening the film in a mortuary class with Bernie offering the basics of beautifying the dead.  “A little dab will do you,” Bernie instructs, before gluing his cadaver’s lips and eyelids together and adding: “You cannot have grief tragically becoming comedy.”  That serves as an apt description of the film’s aesthetic, a hybrid of the Coen brothers and Christopher Guest.  So, too, does “The Music Man” with its con-man crooner and “Les Misérables” with its policeman Javert in obsessive pursuit of Jean Valjean.  Here, Matthew McConaughey (reveling in his role as District Attorney Danny Buck) is the Javert-like lawman who isn’t fooled by Bernie’s likability.  Bernie is so likable, in fact, that Buck has to prosecute him miles from Carthage because of jury bias.

As the sourpuss Marjorie Nugent, MacLaine makes a vibrant return to the screen.  No starring role

has called the veteran actress’s name since she played fashion icon Coco Chanel in 2008 and Hollandsworth’s script, co-written with Linklater, is indeed worthy of her comic talents.  Yes, Marjorie is a demanding old lady who bosses Bernie around and drives him to an impulsive act of homicide but she is also a lonely soul, isolated from friends and family through decades-old grudges, and more than simple caricature.  “I can’t think of a man that has been this nice to me in fifty years,” she says of Bernie.  The pair’s intergenerational romance is one of the strangest things in contemporary cinema: is Bernie a paramour or merely a parasite?  The movie smartly doesn’t say.  There are even chapter titles that turn “Bernie” into a morality play, one of which asks: “Was Bernie Gay?”  Black knows just how to embody this mysterious figure and cryogenically frozen in character, he has the sunny disposition of a TV evangelist shot through with something unsettling and sad.  Stick around for the credits and see the real-life Bernie and Marjorie.  Consider it the sweet hereafter.