THERE ARE REALLY ONLY two great times of the year to go to the movies: summertime, when they’re garish and loud, and just prior to the holiday season when Oscar is rearing his golden head.  In all actuality, the visual treat that is “Snow White and the Huntsman” is a winter film, chockfull as it is of doom and gloom, blood and mud.  It is worth remembering that the Disney-produced “Snow White and the Seven Dwarfs” was released in December of 1937 at the Carthay Circle Theatre, the famed movie palace in Los Angeles.  There are dwarfs, here, too – digitally rendered dwarfs played by Ian McShane, Bob Hoskins, and Toby Jones – but they’re a motley crew with names like Gort and Muir, much dingier than the cartoon versions we know as Grumpy and Sneezy. 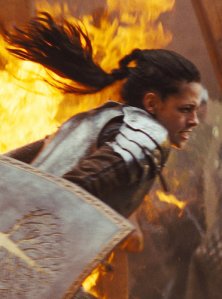 “Snow White and the Huntsman” is from first-time director Rupert Sanders, writers Evan Daugherty, John Lee Hancock and Hossein Amini; it’s also the second Snow White-inspired film of the year (following the more light-hearted “Mirror, Mirror” with Julia Roberts).  When one thinks of Snow White, one doesn’t think of her in a suit of armor brandishing a sword, but Sanders’ take on her is closer to Snow-Storm White.   With a focused and fierce Kristen Stewart in the title role, the princess, daughter of King Magnus, must do battle with the dark queen, the aptly named Ravenna, who has banished her to the Dark Forest.

As the foil to Snow White’s purity, Charlize Theron has just the kind of sharp beauty for the part.  In league with her albino brother Finn (Sam Spruell), she literally sucks the life out of her young subjects when she’s not preening before her magic mirror.  Here it resembles a golden gong that, “Terminator 2”-style, mutates from liquid metal into a man with a Darth Vader-like baritone.  That this version of the Grimm Brothers myth doesn’t shy away from the sexual dynamics inherent in most, if not all, myths is a relief.  Straddling Snow White’s father in his bedchamber, Ravenna quivers a bit after plunging a dagger into her husband’s chest.  There’s something not a little devious, too, in the way she must drain her virginal victims of life to keep herself going and going.  At one point, she oozes from a bleeding flock of crows back into a demonic diva crawling on all fours.  Eat your heart out, Mr. Hitchcock.

Where there are apples, there is allegory, and “Snow White and the Huntsman” is nothing if not a war between good and evil

with the slight sprinkling of a love story.  The widower Huntsman, played by Chris Hemsworth, is originally hired to capture Snow White, but soon becomes her protector.  Four words in the film’s final showdown point to the film as allegory; Ravenna hisses: “I’m everything you’re not!”  Duh, girl!  Ravenna and Snow White may look human but they’re really oppositional forces, intertwined like the eagle and the serpent.  Snow doesn’t even hate the witch who stabbed her father and stole her sovereignty; instead, she pities her.  In keeping with Snow White’s fall, there is an eden to occupy, if only temporarily. One of the real wonders of this film’s top-shelf production value is its take on fairyland; inside, there are epicene nymphs, mushrooms with eyes, snakes and turtles so ingrained in their ecosystem that they have backs made of bark and moss.  The terrain suggests that the human and the nonhuman fuse into one environment, and that the rivalry between the black Ravenna and the white Snow is a ferocious force of nature, always at work around us.

Far from being Sleepy or Dopey, “Snow White and the Huntsman” demands a new dwarf name to describe itself: It’s Icy.

14 thoughts on “Review: “Snow White and the Huntsman””