VAMPIRES, LINDSAY LOHAN, AGENT 007: some things never die. After the franchise flatliner that was 2008’s “Quantum of Solace,” James Bond bounces back to life in the Sam Mendes-directed “Skyfall.”  It’s staggering to think that 45 years ago, the fifth Bond film appeared under the title “You Only Live Twice,” starring its originator: the incomparable, martini-swilling Sean Connery.  He set the gold standard for a Bond as slyly confident undercover as he was under the covers. “Skyfall,” starring the sixth actor (Daniel Craig) to embody Ian Fleming’s hero of the British Secret Service, proves that Bond has more lives than that white cat on the lap of Dr. Evil. “You expect me to talk? Connery asked Goldfinger in the eponymous 1964 film.  “No. . .” replies Auric Goldfinger – all together now! – “I expect you to die.”

Not going to happen. The twenty-fourth Bond installment, “Skyfall” marks Craig’s third turn as 007 and the role, like his tailored silver suit, fits him like a glove. The action sequence that opens “Skyfall” – followed closely by the opening credits in which Adele belts the title song over an opus of a music video – plunges the viewer back into that world of improbable but entertaining stunts.  Set in Turkey, a fight atop a high-speed passenger train recalls the iconic fight scene of “From Russia with Love,” and Bond, like Bourne, appears to plunge to his death after Eve (Naomie Harris) takes a shot but misses.  The order comes from the all-seeing Judi Dench (as M) who won’t see her beloved Bond again until the offices of the MI6 are incinerated in a terrorist attack.  Ralph Fiennes, likely to serve a larger role in the forthcoming Bond films – Craig is contracted for two more – and Ben Winshaw (as the gadget-geek Q) are superb supporting cast members. Behind the camera, the cinematography of Roger (“No Country for Old Men”) Deakins is opulently lush, notably in the Macau chapter.

“Skyfall” could be the best Bondarama since Pierce Brosnan hang up his hat in 2002’s “Die Another Day.” That’s when Halle Berry rose, Ursula Andress-style, like a bikini’d nymph from the sea and Madonna offered a bizarre cameo as a lesbian fencing coach.  Ah, the Bondian world is a strange world indeed.  Recall the goofiness of the Roger Moore years when, in “Octopussy,” circus clowns were killed for smuggling Fabregé eggs and, in “Moonraker,” Bond orbited the earth in a space capsule.  Bond’s world is basically a hetero-male’s fantasy world designed for his pleasure.  Pussy Galore, Holly Goodhead; need we say more? That’s why the queering of Javier Bardem’s villainous Silva gives “Skyfall” a much-needed edge.  When Silva interrogates the agent, he draws in close, strokes Craig’s chiseled face and legs, and tells him not to be nervous as it’s his first time.  “What makes you think it’s my first time?” Bond shoots back.  The scene made the woman seated to my left uncomfortable – or was it the bottle of champagne she and her husband had stashed under the seat? – but the audience erupted in laughter.  Clearly, Mendes and screenwriters Neal Purvis, Robert Wade, and John Logan are having some fun with Bond’s archetypal straightness and forcing him (and us) to loosen up a little. 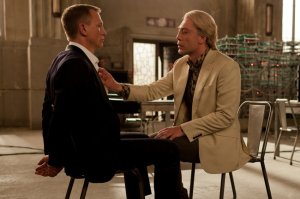 reappearance of that classic chrome Aston Martin DB5 is a welcomed one – and because the conflict between Silva and MI6 is personally motivated. Bardem, whose yellowy wig is reminiscent of Robert Shaw’s peroxide coif in “From Russia with Love” (1963), was disfigured by another reckless call made by M and he’s out for revenge. Could Silva be based on Wiki-leaker Julian Assange?  He essentially duplicates the role of the killing machine he played in “No Country,” but he’s the right actor to simultaneously titillate and terrify.

Ever since Timothy Dalton took over as Bond in 1987’s “The Living Daylights,” an air of artificiality has hung over many of the later Bond films.  Product placement, mannequin-like models come (barely) to life, gadgets that are more Sky-Mall than “Skyfall” – many Bond flicks are like the golden corpses that litter 1964’s “Goldfinger,” roundly considered the best of the lot.   There is still no escaping some of these conventionalities.  Silva forces Bond to shoot a shot-glass, William Tell-style, off the head of a bleeding and bound Berenice Marlohe – a misogynistic spectacle indeed – and the final show-down at the Skyfall estate, where a young Bond grew up, is overlong and ultimately tedious.  Still, the backstory opens up some new territory for the franchise as it could continue to peer into Bond’s early years as an orphan in Scotland.

“Skyfall” is proof that a solid Bond – like a diamond – is forever. 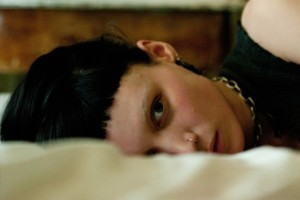 Review: “The Girl with the Dragon Tattoo”

SHE’S AN ANGRY ward of the state.  She’s a goth hacker who can crack high-security codes and passwords like they’re fortune cookies.  She’s got more hardware in her face than C-3PO.  She wears a charming little T-shirt, while rolling out of bed after a one-night-stand with some chick from the club, which reads: “Fuck You You Fucking Fuck.”

She’s Lisbeth Salander, the femme fatale and titular girl in the American film adaptation of Stieg Larson’s best-selling page-turner “The Girl with the Dragon Tattoo.”  When Larson died at the age of 50 in Stockholm in 2004, after climbing seven flights of stairs to his office because the elevator wasn’t working, he left behind three completed but unpublished manuscripts collectively called the “Millennium Series.”  It’s worth remembering that the first in the series was originally titled Män som hatar kvinnor (or “Men Who Hate Women”) before being rebranded in the American book market.  Larson’s crime novel is an indictment of the sleazy industrialists who run modern-day Sweden, but it’s also, to a larger extent, a drama of misogyny wherein women are raped and killed for sport and men seemingly get away with murder.  That’s where Lisbeth, as the dark avenger, and sidekick Mikael Blomkivst (played by Daniel “007” Craig) come in.  As a financial journalist, Mikael is the muckraker who plays by the rules while Lisbeth operates above the law.  He tells Lisbeth: “I want you to help me catch a killer of women.”

By 2011, the plot of “The Girl with the Dragon Tattoo” should already be familiar since Larson’s storyline is not just well-read but much-discussed.  (My 94-year-old grandmother may have never read such detailed scenes of S&M torture had a friend and fellow bridge-player not leant her a paperback copy.) The screenplay is by Oscar-winning Steve Zaillian (“Schindler’s List,” “Awakenings”) and though, at a protracted 158 minutes, it runs a bit long, it distills Larson’s novel into its bare essentials: Lisbeth’s rape/revenge on her legal guardian Bjurman (Yorick van Wageningen), Martin Vanger’s confession as he prepares to kill the novel’s hero Mikael, and that haunting last image of Lisbeth seeing Mikael stroll off with his editor Erika (Robin Wright), leaving Lisbeth out in the snow, all alone on her motorcycle.

In short, the narrative begins in media res: after losing a libel suit, Mikael is hired by the patriarch of the Vanger dynasty, Henrik Vanger (played by Christopher Plummer) to write the family history and solve the murder/disappearance of his grandniece Harriet.  The Vangers reside on a private island and their family tree is rotten to the core: father/daughter incest, rape, not to mention Nazism and generations of secrets and lies.  In a parallel plot resides Lisbeth who, deemed by legally insane after setting her father on fire, comes to help Mikael solve the mystery and in the process, soften a bit and ultimately save the day.

“The Girl with the Dragon Tattoo” is benefited by two tremendous

talents in and behind the scenes: first, there’s newcomer Rooney Mara (“The Social Network”) as Lisbeth.  She’s simply captivating, a living-breathing switchblade.  Then there’s the Knight of Noir, David Fincher, who demands that it either be snowing or perpetually midnight in “The Girl with the Dragon Tattoo.”  The amber flashbacks of the Vangers circa 1965 recall the equally tragic past of the Van Orton family in “The Game” (1997).  Scenes of sexual torture hearken back to the queasiness of “Seven” (1995) and “Fight Club” (1999).  There’s also an eerily electronic score by Trent Reznor and Atticus Ross, the former of whom already won an Oscar for scoring last year’s “The Social Network” (also directed by Fincher).

Given these top-shelf ingredients, and Larson’s potboiler at the center of it all, it was hard to go wrong.  “The Girl with the Dragon Tattoo” is a slick and moody adaptation, cool but not chilling.  Perhaps Lisbeth’s tattoo artist says it best when he warns the girl, his gun buzzing, “This is really gonna hurt.” 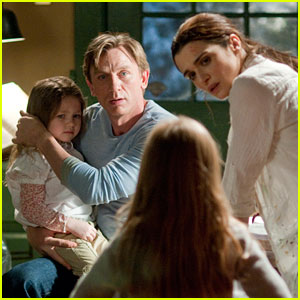 “Burning Down the House”

Only two: city-slickers Libby (played by Rachel Weisz) and Will, a publisher with pectorals played by Daniel Craig (a.k.a. 007 du jour), who move from town to country with bloody results.  The primary problem with “Dream House,” which is set in a New England town called New Ashford with Craig as an aspiring novelist, is that there’s not a shred of newness or novelty in this film (directed by the otherwise bright Irish film director, Jim Sheridan, of “In the Name of the Father” and “My Left Foot”).  As an anguished Libby tells Will, “There is something wrong with this house.”

Wrong, indeed. The less than dreamy house at the center of this turkey is already something of a suburban legend by the time Libby and Will start unpacking boxes.  Horror-queen Naomi Watts plays Anne, Will’s mysterious neighbor who keeps her distance, and won’t say what happened inside the Ward home five years ago.  After Will catches a gaggle of Goths holding a creepy séance in his cellar, and the ever-menacing Elias Koteas (of “Shutter Island,” a superior film built on the same concept of parallel plots) peering through his windows, he complains that he has an “infestation of teenagers in the basement.”  That’s the least of his problems.  Much to his disbelief, he comes to suspect that he is the house’s former occupant, a wife-killer named Peter Ward, and that Libby and his daughters are mere visions.  After paying a visit to Greenhaven Psychiatric Institute, Will comes to wonder: am I Ward?  Am I a widower or a wack-job?

Chances are you won’t stick around to find out and for good reason.  Screenwriter David Louck stuffs his script with laughable lines like “I’m not writing a book, I’m living in a fantasy!” and “Get me the chloroform now!” And when Will and Libby realize that the iniquity inside their walls cannot be suppressed, we get this: “You can’t paint over evil!”

Any smart spectator of this claptrap would be hard-pressed to find something intelligent to say about it, but if forced to lay a cerebral layer of paint over “Dream House,” Freud’s conceptualization of the “The Uncanny” (1919) comes to mind.  To prove that the uncanny relates to what he calls “themes of the double in all its grades and developments,” Freud describes being lost in an Italian piazza: “I suddenly found myself in the same street again [where] my swift departure resulted only in my ending up in the very same place, through a different detour, for the third time.  But then I was overcome by a feeling I can only describe as uncanny […] the unintended return of the same.”   The uncanny isn’t so much déjà vu but the compulsion to repeat and return over and over again.

“Dream House” not only repeats the central conceit of the King/Kubric classic, “The Shining,” in which murdered girls leave an infectious trace behind – come play with us, Danny! – but it goes in circles like the toilet bowl in which it belongs.  When a great conflagration eventually erupts in the final reel, you won’t feel the heat since, by that point, “Dream House” has already collapsed like a house of cards.