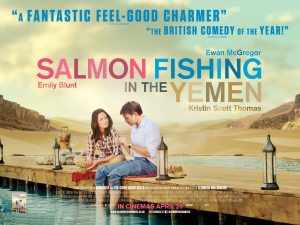 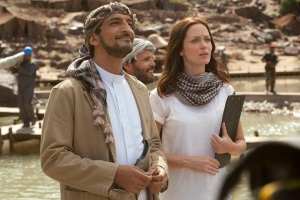 secretary Patricia Maxwell in “Salmon Fishing in the Yemen,” a unique romantic comedy spawned by the Paul Torday novel and the unlikeliest of plots: a progressive sheik and fishing enthusiast (played by Amr Waked) dreams of one day creating a salmon run in the arid deserts of Yemen.  This not only entails the relocation of 10,000 North Atlantic salmon to Yemen but a way to improve the Middle East’s image amongst British voters.  The wealthy sheik has friends in high places, including his assistant Harriet (the lovely Emily Blunt) and Dr. Fred Jones (Ewan McGregor), a fisheries scholar brought on to jumpstart the project.  The possibility of a romance is floated: Harriet’s boyfriend (Tom Mison) has been deployed to fight overseas and Fred’s estranged wife is as cold as ice.  Because the film is directed by Lasse (“Chocolat” and “Dear John”) Hallstrom, “Salmon Fishing in the Yemen” has a mildness to it, however, closer to monkfish than the pungency of salmon.  Well performed and paced, Hallstrom’s fish-of-the-day is a total original: it swims upstream whereas most rom-coms are mere groupers and cling to cliché.

Another fishy film to wash ashore is David Gelb’s debut documentary, “Jiro Dreams of Sushi,” which centers on sushi-master and octogenarian Jiro Ono, chef and restaurateur who runs this tight ship: a basement-level establishment called Sukiyabashi Jiro in the Ginza district of Tokyo where just 10 patrons at a time will pay upward to 30,000 yen to belly up to the bar.  Gelb’s film elevates the chef to the level of demigod; watch as he instructs his diligent sons, especially Yoshikazu who weathers his father’s blows and manages the restaurant along with a team of aspiring chefs told to massage octopus for hours on end and handle fatty tuna like it’s fine china.  Gelb’s dreamy documentary really crests when it leaves the table: it’s not, of course, a study in sushi but in Chef Ono’s incredible dedication to his art.  It’s more a study in character and the determination to perfect one’s craft than a loving look at what’s on the plate.

With both these fresh catches in mind, it’s worth recalling the famous lines of Rudyard Kipling whose separatist song goes like this: “East is East and West is West and never the twain shall meet.”  In both “Salmon Fishing” and “Jiro Dreams,” East meets West and that meeting place smells fabulously fishy.

A HEAPING PILE of celluloid excrement, “This Means War” is the first bonafide bust of a film released in 2012.  Reese Witherspoon walks the line as Lauren, the object of affection for not one but two undercover CIA agents, played by Chris Pine (“Unstoppable”) and Tom Hardy (“Warrior”).  Numbly named FDR Foster and Tuck, the men are in Hong Kong and on the hunt for a criminal named Heinrich (Til Schweiger).  When they botch the mission, their boss (played by Angela Bassett) demotes the two to desk duty.   Enter Witherspoon as Lauren, a product testing exec who, prompted by friend Trish (Chelsea Handler playing Chelsea Handler), joins a dating website and meets Tuck and later, FDR.  When the men realize they’re dating the same woman after showing each other Lauren’s picture on their laptops, they make a gentleman’s agreement and begin the love-game: may the best man win.  From there, the forgettable plotline involves tranquilizer darts, romantic pizza dinners, and one image that aptly mirrors the film itself: a car going off an unfinished bridge.

“This Means War” is directed by the mononymous McG (“Charlie’s Angels”) from a script by Timothy Dowling and Simon Kinberg, the latter of whom wrote “Mr. and Mrs. Smith” and has basically retooled that earlier script about special agents on the down-low.  And speaking of the down-low, the most remarkable thing about this unremarkable romantic comedy is the length to which FDR and Tuck go to get the girl in a film where the real love story is a bromance between two very undercover agents.  (The same could be said of Lauren’s closeness to Trish insofar as the film’s strongest bonds are same-sex.) The fact that the men plant bugs and hidden cameras in Lauren’s home to spy on her – or could it be each other? – isn’t just creepy and unfunny but deeply homosocial.

“the men’s rivalry soon escalates into a spy versus spy shenanigans […] you’re watching a cuddly stalker flick,” but an even more astute angle on “This Means War” can be found in the work of Gayle Rubin who, as queer theorist Eve Sedgwick once wrote, argued that “patriarchal heterosexuality can best be discussed in terms of one or another form of the traffic in women: it is the use of women as exchangeable, perhaps symbolic, property for the primary purpose of cementing the bonds of men with men.”  This means that the most curious scenes are those between FDR and Tuck and that, when Lauren enters, it’s not so much war but a bore.

The Times’ Dargis also believes Witherspoon to be miscast, writing: “She’s too calculating and self-contained a presence for most romances.”  What do you think: is Witherspoon too feisty for such light fare? 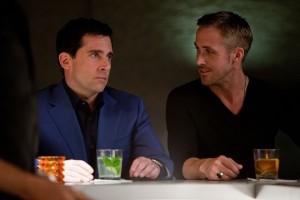 IN CASE YOU hadn’t heard, the feet are the windows to the soul.  At least, 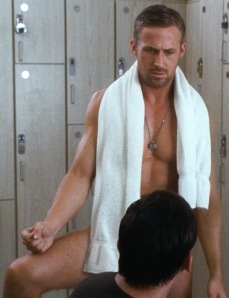 the opening shots of “Crazy Stupid Love,” in which we see various couples engaged in playful games of footsy under restaurant tables, suggest as much.  The credits come to a screeching halt with the first sight of Mr. and Mrs. Weaver’s feet which, removed from each other and planted firmly on the floor, say a lot about their moribund marriage.  Worse, Cal Weaver (played by Steve Carell) is decked out in suburban dad-wear – khaki pants and New Balance sneakers – and unbeknownst to him, his wife has slept with a coworker (Kevin Bacon).  Yes, the thrill is gone for Emily Weaver (played by Julianne Moore) though she’s not sure she wants the single life either.  When the two can’t decide on a dessert, Cal suggests they simultaneously blurt out exactly what it is they’re craving.  But Emily doesn’t exude baked Napoleon, as Cal might have hoped, but “I want a divorce.”  How a good-natured guy like Cal can rescue and restore his marriage becomes the premise which “Crazy Stupid Love” pursues with entertaining results.  This is another comic success from “Bad Santa” writer-director team Glenn Ficarra and John Requa who, in 2009, debuted with the underrated “I Love You Philip Morris,” the story of a gay conman (Jim Carrey) who only has eyes for Ewan McGregor.

After free-falling into newfound bachelorhood after twenty plus years of marriage, Cal lands in a posh nightclub packed with beautiful and available women.  He becomes something of a dreadful fixture in the bar, however, as he drinks too much and bores strangers with the details of his breakup.  Carell’s delivery is pitch-perfect as we watch an inebriated Cal talking (slurring) to himself: “You know what word isn’t used much any more? Cuckold!  I was cuckolded by my ex-wife!  She made a cuckold out of me.”  And just as Cal becomes a social car-wreck from which you can’t look away, Jacob (Ryan Gosling) steps in to remake this lonesome loser into the Casanova he knows Cal has hiding inside.  In his crisp collars and tailored suits, Jacob isn’t just a clothes horse but a sartorial stallion.  Gosling is also like licorice for the eyes and even Cal is seduced; the two develop a deep and enduring bromance.  When he meets Cal at a LA shopping mall, Jacob throws Cal’s sneakers over the balcony before shepherding him through a new-clothes shopping spree, assuring him that Emily will rue the day she ever left him.  This is the capitalistic ethos personified: the road to romance runs right through your wallet.

The banal title notwithstanding, “Crazy Stupid Love” will charm you in large part because of Carell’s anxious everyman antics and the smirking ease of Gosling’s performance.  It’s good to see the latter lightening his pallette after last year’s pathos-laden “Blue Valentine.” The script is also layered with charming though familiar subplots. The Weavers’ preadolescent son, Robbie (Jonah Bobo), for example, has made a religion out of his babysitter Jessica (Analeigh Tipton) who is too infatuated with her employer Cal to notice.  Coincidences multiply in “Crazy Stupid Love,” which is cleverly plotted by “Cars” screenwriter Dan Fogelman, but perhaps too much so in the film’s final moments.  Set at a backyard BBQ, the resolution feels like a sitcom where loose ends are tied together too tightly.  Still, in a summer cinemascape occupied by Smurfs and penguins, it’s refreshing to see a romantic comedy aimed at grown-ups as crazy and stupid as we may be.