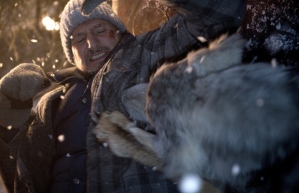 REMIND ME TO shell out the extra forty bucks and check action star Liam Neeson as my carry-on luggage when I next traverse Alaska in the dead of winter, in a howling storm.  To the passengers of the luckless aircraft that makes a crash landing, the experience is terrifying – a plane breaking apart hasn’t sounded this cacophonously life-like since “Cast Away” (2000) – but to the wolves on the ground, it’s lunch and dinner.  Where is Sarah Palin and her high-power rifle when you need her? 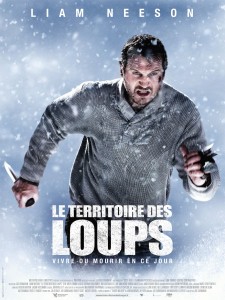 In “The Grey,” directed by Joe Carnahan (“The A-Team,” “Smokin’ Aces”) from a script co-written with Ian Mackenzie Jeffers (from his story “Ghost Walker”), Neeson plays a survivalist man on the ground named Ottway, conveniently a wolf-hunter working for a big-oil company who, post-crash, becomes the hunted.  The solemn voice-over narration, alongside the lupine howls of the white wilderness, that open Carnahan’s film alert us to some of its more unconventional aspects: a suicidal protagonist, pauses in the action to meditate on faith and providence, and the utter irresolution of the ending which left one loud-mouth in my local theatre yelping: “That better not be the ending!”

Then there’s Neeson himself who, Roman nose and all, hasn’t exactly hung up his acting hat but turned, as of late, to fast-paced action films in which he stoically takes on European prostitution rings and identity-thieves (i.e. the convoluted “Unknown”).  Since “Taken,” the finest action film from the 2000s in terms of sheer pacing, Neeson has been honing a particular set of skills – “skills,” as he menaces there,” that make me a nightmare for people like you.”

and the unrelenting forces of nature bear down on him and his men, an equally fine group of actors including Dermot Mulroney, Nonso Anozie, Dallas Roberts, and Frank Grillo.  It’s a motley crew – all bearded and bellicose – and the most surprising thing about “The Grey” is that the men collectively ponder spiritual matters – “Did you feel him go?” one of the men asks as a priest-like Neeson administers last rites to a dying man, “I felt him go!” – as the noose around them tightens.  There’s also a touch of humor: after killing a wolf which Neeson describes as the pack’s “omega,” they fire up the spit-roast and remark: “I’m really more of a cat person.”  As the stolid Ottway, Neeson follows in the footsteps of Robert Shaw’s Captain Sam Quint in “Jaws” (1975).  The wolf is his land-shark and he instructs the men: “They’re man-eaters and there’s blood in the air and death.”

“The Grey” doesn’t exactly rise above predictability – we know that when seven survivors set out, at least one has to wind up in a body-bag (or is it doggy-bag?) – but the filmmakers do “go there” in terms of the film’s homosocial conditions.  There’s a passing reference at the start to the late Timothy “Grizzly Man” Treadwell as that “fag who likes bears.”  And when the fur starts to fly, so do anti-gay epithets like “girls” and “fairies” as each man’s masculinity is tested.  When Neeson is forced to keep his drowning friend alive via mouth-to-mouth, the film’s interest in men-in-cramped-conditions, well, bubbles to the surface.

It was at that queer moment in “The Grey” that the old diddy from Duran Duran came to mind: “I’m on the hunt/I’m after you/Mouth is alive with juices like wine/And I’m hungry like the wolf.”