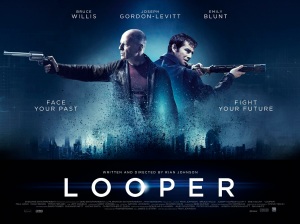 “IF YOU WANT a vision of the future,” George Orwell once remarked, “imagine a boot stamping on a human face – forever.”  If that’s a grim forecast, it’s also a strikingly apropos one in relation to “Looper,” a dystopic sci-fi flick from writer-director Rian Johnson (“Brick,” “The “Brothers Bloom”).  It’s the second best science fiction film of 2012, after the even loopier “Prometheus.”

The face-stamping boot in “Looper” belongs to Bruce Willis (old Joe), a contract killer working for a crime syndicate in the future, who returns to the year 2044 to confront a younger version of himself (played by Joseph Gordon-Levitt).  Because time travel has been outlawed, young Joe is a bad guy (and a junkie), a “looper” hired to, as he puts it, “take out the future’s garbage.”  He works a remote corner of a cane-field in Kansas where his victims suddenly appear, hands-tied, head-bagged, ready for a shotgun blast to the chest.  The executions are carried out like clockwork until, of course, there’s a glitch in the “Terminator”-like system. 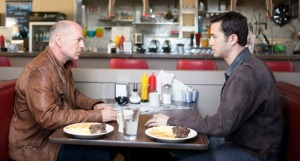 Unbeknownst to him, Joe’s bosses in the future have sent the old Joe back in time to be killed by the young Joe and effectively close the loop.  We never see the evil genius known as the Rainmaker, busy sending old loopers thirty years back in time to be shot down by their former selves.  Joe’s friend Seth (Paul Dano) suffers this gory fate early on in the film.  Watch as a young Seth is cut down, limb by limb, in the present, his wounds materializing in the future.  Don’t worry; the temporal antics of “Looper” won’t be on the test. 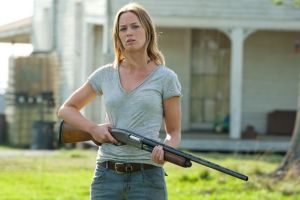 timey.  There’s a prostitute (Piper Perabo) who keeps the young Joe drugged and confused, and, in the farm house nearby his killing floor, a single mom named Sara (a butch Emily Blunt) keeping a close watch over her precocious son Cid (Pierce Gangon).  Could Cid be one of the three kids that the old Joe is dead-set on exterminating?  The uncanny Gangon has special powers, which I won’t reveal here, but he could be the creepiest kid on film since the tricycle-riding Danny Lloyd in Kubrick’s “The Shining.”  Blunt, meanwhile, who has the Midas touch in picking scripts, never gives a bad performance and she offers the film some much-need pathos.  She shelters Joe, from old Joe and from the truth, and in the end, young Joe returns the favor in a sacrificial last act.

The only misstep in “Looper” was a needless effort to make Gordon-Levitt look like Bruce Willis.  A plaster mold of Willis was cast to help the young actor resemble the iconic action film star.  Fitted with a putty nose and prosthetic upper-lip, young Joe looks more like a glass-eyed Howdy Doody doll than the moonlighting star of yesteryear.  And because science fiction is always already not the real world, this turns our anti-hero into something even further unreal and distracts the audience.  The gun violence is gratuitous as well, and though it happens off-screen, watching children getting shot at close range threw me for a loop.  It goes without saying that if the older version of myself in 2042 got in touch with me now, I’d be asking for stock tips, Super Bowl wins, Lotto numbers, and other money-making factoids, not whom to kill and when and where.  But that’s the real world not the movies.

“Prometheus” aside, “Looper” could be the most inventive science-fiction film of 2012; what is your vote for best action/sci-fi film of the year thus far?