IF NOT FOR Denzel Washington’s soulful performance as an airline pilot, “Flight” might have never left the runway.  Make that a chain-smoking, vodka-guzzling airline pilot who wakes up, hung over in an Orlando motel room, but goes on to save the day after force-landing his plane in a field outside of Atlanta with 102 passengers aboard.  We’re used to seeing Washington in the stentorian sort of parts that win him Academy Awards, and this unlikely choice of a role will again keep him in the running for a third statue.  Washington is famous for his pearly smile and big-dog swagger, but here, he’s a man who, like the plane he flies, has lost what’s called all “vertical control.”

At the turbulent center of “Flight,” Whip Whitaker is the very definition of the anti-hero – or, the flawed warrior – and one that Washington has agonizingly brought to life. No one had to know that the Captain, who appeared sober when he boarded the plane that morning, was also high on cocaine, having partied into the early morning with one of his flight attendants.  That is, until a pesky toxicology report surfaces after the plane crashes, six lives are lost, and an investigation by the NationalTransportation Safety Board is opened on the causes of the accident.  Director Robert Zemeckis gave us possibly the most terrifying plane-crash scene in 2000’s “Castaway,” a film that similarly explores the painful truth that no man is an island, and “Flight” is a close second.  Zemeckis, known for the visual wizardry of “Back to the Future” and “Forrest Gump,” eschews the predictable aerial shots of the plane in a total nosedive for the pure panic within the cabin where a stewardess, knocked unconscious, ragdolls from floor to ceiling and passengers puke upside down.  The plane is later said to have dropped 4,800 feet per minute and you will feel every foot.

Sensitively scripted by John Gatis, “Flight” is about a different kind of nosedive, that is, Captain Whitaker’s ambivalent attempt to clear his name while, at the same time, cling to the addictive and destructive ways that led up to crash.  He has plenty of enablers around him, including his dealer (John Goodman) and lawyer (Don Cheadle), to ensure that he keeps off-track.  In big-budget Hollywood films such as this one, the twelve steps of rehab usually end in redemption, and “Flight” is no exception.  Whip’s guardian angel is another addict named Nicole (newcomer Kelly Reilly). Despite the fact that Zemeckis and Washington are famous for their flashiness, the most powerful scene in “Flight” is a virtually bare one: inside a hospital stairwell, sneaking a cigarette, Whip meets Nicole, still recovering from an overdose, and a cancer patient (James Badge Dale) from downstairs.  Each has been ravaged by disease in some way and Whitaker is forced, perhaps for the first time, to look at his casual disregard for his life and the lives of others.

When redemption does inevitably arrive in “Flight,” it’s played out in the most public 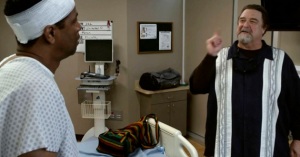 and painful way possible and under the watchful eye of actress Melissa Leo as the Captain’s investigator.  Up until that point, the viewer knows what the public does not, that behind closed doors, the perceived hero behind the plane crash is, in fact, a deadbeat dad, a violent drunk, and in deep denial about his substance abuse.  Yes, he saved the day, but as many high-school drug counselors have been known to say, imagine what he could have accomplished had he not be out of his mind. In this way, “Flight” forces us to rethink some of the just-add-water heroization so prevalent in American culture post-911.   It also takes a hard, close look at addiction and its discontents.