“FICTION IS ABOUT what it means to be a ******* human being,” said the late, great David Foster Wallace.  I have censored the post-postmodern author of Infinite Jest and A Supposedly Fun Thing I’ll Never Do Again only because Wes Anderson’s newest opus, “Moonrise Kingdom,” not only delivers on Wallace’s challenge to all contemporary ironists to rise about their sometimes stilted aesthetic and to show some heart, but because, at Camp Ivanhoe, the summer scout camp setting of Anderson’s adolescent romance, cursing is forbidden.

So, too, is running away from home (and camp), the double infraction of the comedy’s twelve-year-old couple, Sam (Jared Gilman) and Suzy (Kara Hayward).  She’s a little runaway, carrying a suitcase of obscure books and a pair of scissors for lefties.  Remember, however, that “Moonrise Kingdom” is a Wes Anderson movie, which means that the couple beats to their own drum and moves at the pace of molasses. Think of Shakespeare’s star-cross’d lovers after the pair had given blood and/or ingested a large-animal tranquillizer.

Sam and Suzy’s escape throws Khaki Scouts’ leader, Scout Master Ward (Edward Norton) into his bloodhound mode and hot on the young couple’s trail, he enlists the support of Suzy’s parents (Andersonians Frances McDormand and Bill Murray).  Yet “Moonrise” follows a higher law: Walk, Don’t Run!  There’s no real hurry in Anderson’s world: Scout Ward pauses to smoke, sip scotch in his plaid, zippered tent and record his reflections.  Co-written with Roman Coppola, “Moonrise Kingdom” excels because it delights in the fascinations of childhood and the complexities of adulthood in equal measure.  Enter Bruce Willis as Captain Sharp, whom Suzy’s mother has been seeing extramaritally, and as much as Suzy fights her mother, we can’t help but notice the major way in which she becomes her by the film’s end.

At one point, a bespectacled Sam (replete with Scout badges and coonskin hat) exclaims, while fishing with Suzy: “Fish on hook!  Reel 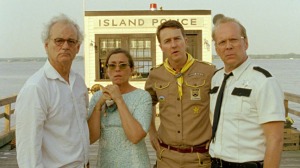 him in slowly!”  That instruction could serve as an apt metaphor for Anderson’s method, more self-satisfied than eager-to-please. A storybook-like plot and excellent ensemble cast (including Tilda Swinton and Jascon Schwartzman) reel the viewer in and in and in.  Again, Anderson doesn’t like to be rushed.  The reason why “Moonrise Kingdom” succeeds whereas his most dissatisfying deadpans such as “The Darjeeling Limited” and worse, “The Life Aquatic with Steven Zissou,” did not, is that adulthood is shaky ground for Anderson; his adult characters come across as precocious children whereas his children are more like puerile adults.  As paradoxical as it may seem, “Moonrise” is a fully mature work about immaturity.  Who else but this auteur could give us an over-stylized scene in which Sam’s foster father’s yellow shirt matches a yellow fan, a yellow refrigerator and a yellow rotary phone, and exchanges like this one, concerning the death of a dog named Snoopy:  “Was he a good dog?” Suzy asks of Sam to which he replies: “Who’s to say but he didn’t deserve to die.”

Meanwhile, it’s safe to say that “Moonrise Kingdom,” Anderson’s best film since “The Royal Tenenbaums” a decade ago, is the most uncampy fun you’ll have at the cinema this summer.  Walk, don’t run.