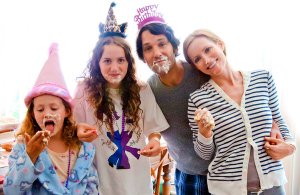 THE LATEST FROM Judd Apatow, the kinky king of comedy, is “This Is 40.”  As romantic comedies go, this is funny and his best work since “Knocked Up” of 2005. The indefatigable Paul Rudd plays Pete, a struggling record label owner, and Leslie Mann plays Debbie, a devoted mom.  She’s turning forty, or is she?  Even Debbie’s physician scolds her for fudging her birth-date on her paperwork.  The tone of this comedy is 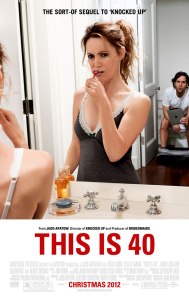 light; Apatow has clearly matured since the bathroom humor of “The 40-Year-Old Virgin” though we haven’t left the bathroom entirely: Pete is prone to retreat there for a little peace and quiet.  But Debbie will abruptly draw back the door, asking who sits on the toilet for such a long period of time. It’s a relief to see that Pete and Debbie aren’t going for each other’s throats.  Their quarreling is not of the catastrophic kind – “This is 40” opens with Debbie horrified to learn that Pete has taken a Viagra to turn him “turbo,” as he puts it – but a kind of banal back-and-forth and the doe-eyed Mann is an expert at looking comically confounded.  “Why do we even fight?” she asks during a getaway in which Pete brings pot cookies and clowns around the hotel room.  It’s a question that all couples have asked themselves, especially when things are going smoothly. Just give it ten minutes for the mood to change.

his films. Mann is Apatow’s wife off-screen and, on-screen, Pete and Debbie’s daughters, Sadie and Charlotte, are played by Maude and Charlotte Apatow, respectively. The fact that they’re a Hollywood family doesn’t mean they feel fake.  Maude is 14 and accosts her folks for limiting her cell-phone and iPad use; Sadie, still their little girl, stands back and snarks that her big sister was nicer before her “body got weird.” Maude and Paul butt heads over the merits of TV shows like “Lost” and “Mad Men” while Debbie harasses one of Maude’s classmates for dissing her daughter’s looks on Facebook.  The boy’s mother is played by the marvelous Melissa McCarthy of “Bridesmaids.” Stick around for the outtakes, which are often funnier than anything in preceding 155 minutes.  Yes, “This is 40” runs a bit long, but it’s one lengthy salvo of jokes, jokes that work. (The film was pegged as “This Is 40 Minutes Too Long” by insiders prior to release.)  Pete’s father Larry (Albert Brooks) is on his second family with blond triplets; he’s always hitting his son up for cash.  Debbie’s father Oliver (John Lithgow) meets his granddaughters for the first time at a party; it’s an interaction Charlotte can only describe as “awkward.” Apatow’s film affirms family life but without any piety; this family feels ferociously real. 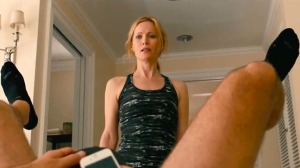 If you’ve ever taken a yoga class, you have probably been put in happy baby pose. That’s the one where you lie on your back and grab the soles of your feet like some blissed-out toddler.  “This is 40” features Pete and Debbie in their own adult versions of happy baby pose: Debbie discovers her husband on his back, legs up, asking her to examine his anus for him.  Again, she’s horrified and looking quickly, says “It’s a hemorrhoid” before running for her life.  Debbie, too, finds herself at the gynecologist in a similar pose as two nurses and the doctor breeze in, prattling away as she’s trapped with her legs up and open.  A yoga teacher of mine once described happy baby as “a vulnerable position,” and that’s an apt metaphor for where Apatow likes to position his characters and his audience.  “This is 40” makes happy babies of us all.