“IF YOU RIDE like lightning you’ll crash like thunder.”  Those are cautionary words delivered by Ben Mendelsohn, a car mechanic and former bank robber, to Ryan Gosling in “The Place Beyond the Pines.” It’s a worthy follow-up, from director Derek 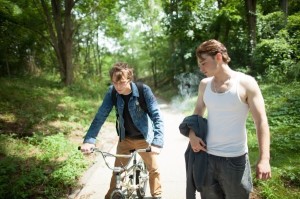 Cianfrance, to his “Blue Valentine” of 2010 and every bit as grittily realistic and desperately somber.  A peroxide-blond Gosling plays Luke, a stunt biker and drifter who, in an already much-discussed opening shot, walks from his carnival tent to a giant metal cage in which he and two other bikers zip around upside down and sideways. Cianfrance maintains that frenetic pace as Luke is soon reunited with Romina (Eva Mendes) whom he saw the last time he was in town and, unbeknownst to him, impregnated.

Luke vows to pull his life together and support his wife and child but is drawn to the allure of danger and easy money.  Ben Mendelsohn’s character Robin schools Luke in how to rob banks in the Schenectady area, which he does successfully, at least, for a

while. Gosling’s character is heavily tattooed – Frankenstein’s visage adorns his hand – but all the writing on his neck and fingers belies the fact that Luke is virtually unreadable.  Gosling can play this too-cool-for-school macho role with his eyes closed – we’ve seen it before in “Drive” where there, too, he played another stunt man with a heart of gold – but here, he makes us sympathize with this daredevil turned family man.  “Pines” artfully captures the exhilaration of crime as we watch Luke speed off, heist after heist, to Robin’s getaway truck, which carries him out beyond the pines where the men chain-smoke and count their cash.

Like “Blue Valentine,” “Pines” spans a swath of time – fifteen years, to be exact – and it would spoil the plot to reveal how exactly Luke and Bradley Cooper’s character Avery cross paths except to say that film’s second half belongs not to the criminal but to the cop who stops Luke dead-in-his-tracks.  Avery is the son of a judge (played by Harris Yulin) and a new father himself, and though his life looks honest and respectable in comparison to Luke’s, we find that he’s surrounded by crooked cops (including a typecast Ray Liotta).  Flash-forward 15 years and both Luke and Avery’s sons – AJ (Emory Cohen) and Jason (Dane DeHaan) – are teenagers in the same high school, and here we see the leitmotif of the sins of the father played out as Jason slowly realizes his friend’s father’s involvement in his own family history. ‘Nuff said.

“The Place Beyond the Pines” is driven chiefly by the magnetism of its actors.  This is surely Eva Mendes’ best performance to date, but because “Pines” is interested mainly in men and the patrilineality of violence and regret, she’s forced to bring everything she has to a somewhat trite and undeveloped role.  The same is true for Rose Byrne 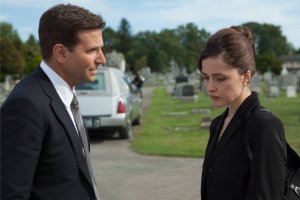 who (dis)appears later in the film as Bradley Cooper’s wife Jennifer.  It’s the singular failure of Cianfrance’s film – and a script by Ben Coccio and Darius Marder – that a woman’s only job is to wait on the sidelines and worry about her man.  AJ is entirely misplayed by Emory Cohen – too “street” for a DA’s son – whereas Dane DeHaan brings real pathos to the part of Jason, a fatherless child who, in the last scene, only wants to feel what his outlaw father must have felt as he drives his motorcycle out beyond the pines.  It’s a lasting image and one of an achingly real predicament: a teenager who, lost in his own grief, can’t see the forest for the trees.

“One Flew Into the Cuckoo’s Nest”

FOR A GOOD while at least, “Silver Linings Playbook” is a film that is proudly off its meds and taking no prisoners.  Its opening has all the panicked pacing of a jailbreak and very nearly resembles one: Pat (Bradley Cooper) is being released from a court-ordered stay at a Baltimore mental health facility and he takes his friend and fellow patient (Chris Tucker) along for the ride.  Eight months earlier, Pat savagely beat his wife’s boyfriend after discovering the two in a shower with his wedding song – Stevie Wonder’s “My Cherie Amour” – wafting in the steamy air.  Hearing even three seconds of the love song will set him off and set him back on his road to recovery.  We want to see him well and when Cooper, who has a vulpine face, steadies his closely set blue eyes, he has a scrappy-boy look of desperation that cries out for his mother or at for a prescription refill. In terms of mental illness, “Silver Linings Playbook” endorses a dangerous diagnosis, as simple-minded as the eponymous Beatles song: all you really need is love. 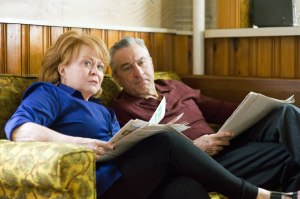 Back in Philadelphia, Pat’s homecoming is met by his worried mother (Jacki Weaver) and Pat Sr. (Robert De Niro), an obsessive fan of the Eagles and sports bookie who has no other way of communicating with his wife and son except through professional football.  He keeps his remote controllers in a tidy row and thumbs a lucky handkerchief as he watches every game on the edge of his seat.  Apparently, madness runs in the family.  There’s also mental illness just around the corner, in the form of Tiffany (Jennifer Lawrence), a policeman’s widow already popular with the local pervs for putting out.  Pat and Tiffany appear to be a match made in Halcyon and when the two cross paths at a dinner party hosted by Tiffany’s older sister Veronica (Julia Stiles), it’s a contest to see who can say the most outlandish thing or do the most impulsive thing to shatter any sense of civility and calm. They trade their experiences on different anti-psychotics as if they were vacation towns they’ve visited and walking Tiffany to the end of her driveway, Pat is invited inside for casual sex and slapped across the face in quick succession.  Both find that the other is useful in some way: Tiffany can help Pat get to his ex-wife, Nikki, who has placed a restraining order against him, and Pat can help Tiffany win a local dancing competition. To that end, she has converted her parents’ garage into a dance studio and once he agrees to train as her partner, she insists on daily dancing lessons.  This allows for the film’s pas de deux to take literal shape and pulling Pat in close, Tiffany brings her nose to his. “You feel that?” she asks of Pat. “That’s emotion.”

paranoid patriarch in “Meet the Parents” and “Silver Linings Playbook” restores the actor to the realm of serious and sensitive cinema.  These same youngsters only know Bradley Cooper as the playboy ringleader in “The Hangover” and after such misfires as “Limitless” and “The Words,” he has finally found his mojo as a leading man. Yet “Silver Linings” runs off the rails in its last reel; it wants a happy ending and its lovers to ride off into the sunset when, in reality, people like Pat and Tiffany are missing the gene for Hollywood-like happiness.  There is no way that Pat’s therapist Dr. Patel (Anupam Kher) would attend an Eagles game with his face painted, nor come to Pat’s home like he’s one of the family, and the swanky Philadelphia hotel in which the dancing competition takes place is not the sort of place Pat Sr. would visit without criticizing his son for trading in his football jersey for a pair of dancing shoes.

I have to admit I felt a little like Pat who, earlier in the film, flies off the handle when he reaches the unhappy ending of Ernest Hemingway’s A Farewell to Arms.  Enraged, he throws the paperback out an upstairs window, breaking it, and wakes his parents in the middle of the night to blast the novel for its depressing but decidedly realistic ending.  If only director David O. Russell (“Spanking the Monkey,” “The Fighter”) had taken a page from Hemingway’s playbook and not Hollywood’s.

“DON’T YOU KNOW words ruin everything!”  That’s Dennis Quaid, as novelist Clay Hammond, in “The Words,” a morality play on the perils of plagiarism.  Written and directed by Brian Klugman and Lee Sternthal, “The Words” is also the title of Hammond’s newest novel, which tells the tale of a young writer named Rory Jansen (Bradley Cooper) struggling to find literary stardom.

If that sounds like a story-within-a-story,  that’s because “The Words” is a three-tiered narrative in which Hammond pulls the Thackeray-like strings,  giving a public 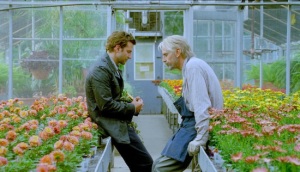 reading of his new work and attracting the attention of his number one fan (Olivia Wilde).  Quaid duplicates the arrogant professor role he played in 2008’s “Smart People” – could this tepid performance be a form of self-plagiarism? – and his lifeless narration drains “The Words” of much of its energy.  Still, the tale he tells is an absorbing one:  rejection letter after rejection letter, Rory is turned away for writing books described by literary agents as too “interior.”  Honeymooning in Paris, he finds, while antiquing, a yellowed and unpublished manuscript sealed inside a suitcase.  That manuscript, which Rory promptly publishes as his own, is entitled “The Window Tears,” and it brings Rory immediate commercial and critical success.  Rory’s own number one fan is his randy wife Dora (Zoë Saldana) who believes wholeheartedly in her husband’s potential, that is, until his literary lie is revealed.  After reading Rory’s new novel, she tells him: “there are parts of you in this novel never seen before.” 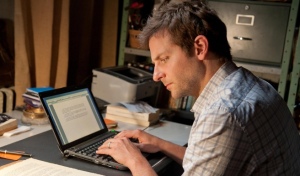 The problem is that Rory’s best work yet has been seen before: by its actual author (a commanding Jeremy Irons) who comes out of the woodwork to confront Rory with his plagiarism.  Known as the Old Man, the Irons character has yet another tale to impart and he does so on a bench in Central Park.  This third narrative, told in flashbacks, is more urgent than the others because it’s undoubtedly his own: as a young man (played by Ben Barnes) in 1940s France, he wrote “The Window Tears” in the wake of his baby girl’s death only for the manuscript to be lost by his waitress wife (Nora Amezeder).  This inner-most story in “The Words” mirrors the real-life legend of Hemingway’s first wife who lost Papa’s unpublished writings in 1922 and because of it, lost Hemingway’s love and trust forever.

Since his breakout performance in “The Hangover,” Bradley Cooper has sobered up and partaken in more intelligent fare.  The problem is that for a film about the pitfalls of plagiarism and the pressures of originality, clichés abound.  Writers on screen are usually portrayed as selfish sadsacks, and Rory is no exception; he’s a well-groomed thirysomething still hitting his father up for money.  Given, however, his robust wardrobe, Cooper looks more like an assistant editor at Men’s Journal than he does a Franzenish raconteur.  Lukewarm, “The Words” is a noble effort with only modest results.   It’s as if “The Words,” which is neither boring nor exciting, was written in invisible ink.