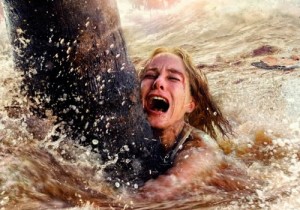 TWO ASPECTS OF Juan Antonio Bayona’s disaster film “The Impossible” will haunt you.  The first is the tsunami itself, which slammed into south-west Asia on the 26th of December, 2004, killing nearly a quarter-million people and leveling scores of luxury hotels.  “The Impossible” begins and ends with the Bennett family, Maria and husband Henry (Ewan McGregor), flying to and fro a high-end Thai resort where they open Christmas gifts and lounge poolside. The film’s first fifteen minutes are the lull before the storm and Bayona is even able to extract a frisson of terror out of something as quotidian as a red rubber ball that the Bennett boys – Lucas, Thomas, and Simon – bop around the pool area; they’ll soon find themselves floating out to sea like the ball itself.  Wilson!  A loose page is blown out of the book Maria is reading and gradually, the vacationers notice that something sinister is in the air.  One of the most terrifying images is of the palm trees just beyond the hotel walls being felled, one after another, as the Indian Ocean violently overruns the lazy sunbathers.  Bayona gives us numerous underwater shots in which we see a soup of twisted metal, palm trees, bodies, automobiles reduced to matchbox cars, even a drowned elephant. 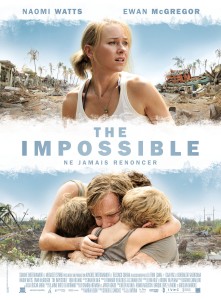 Beyond such verisimilitude, which is agonizing indeed, there is also Naomi Watt’s performance as Maria, a doctor who has temporarily hung up her stethoscope to raise her three young sons while living abroad in Japan.  Bayona built the biggest water tank in Europe to simulate the disaster and, currently making the rounds on TV talk shows prior to Oscar night next month, Watts reports that she was strapped to a chair, submerged, and brought to the brink of drowning in order for the director to elicit true terror from her.  But Watts’s performance is a marvel not simply because of her lung-busting cries – she gave us plenty of those one decade ago in “The Ring” – but because of her relationship with Lucas (Tom Holland), the eldest of her sons. There’s that uncomfortable moment when Lucas is ashamed to see his mother’s mangled and exposed breast; there’s another when Maria insists on helping an abandoned boy whom she and Lucas hide in the treetops. Dehydrated, leg badly injured, Maria shares a soda can with the two boys and stares up at the younger one like he’s a cherub on high.  A good actor, like a good tennis partner, brings out the best in her scene-mate and Watts is able to elevate Holland so that he, too, becomes the emotional core of “The Impossible.”  You don’t doubt for a second that it’s her love for Lucas and the other family members that keep her fighting for her life.

The film’s title is trite, the family’s reunion never really in question, and Bayona (“The 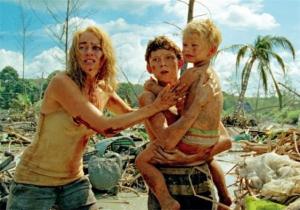 Orphanage”) either forgot or simply didn’t feel the need to close the film with the official death toll or some kind of acknowledgment that most, if not all, the tsunami-victims weren’t as lucky as the upper-class Bennetts who had health insurance and private planes at their disposal.  It’s as if every other survivor is put there to either facilitate or frustrate the family’s predictable reunion. The Bennetts are actually an Anglicization of the real-life family that survived the disaster, the Alvarez Belóns of Spain, and it’s a shame that European actors were swapped out for blond-blue-eyed ones. Nevertheless, it’s Watts who powers “The Impossible.”  That’s her kilowatts.