“Take Me to Your Bleeder”

WHAT ALIEN IN movie history has ever come in peace?  With the exception of E.T. and the space-oddities of “Men in Black,” how many little green men touch down with nothing but the best intentions?

The lethal leviathan at the gory core of “The Thing” is no exception to the rule.  Jeannette Catsoulis, a film critic at The New York Times, has already remarked on the creature’s resemblance to a “toothy, tentacled vagina,” which neatly sums up the film’s conflicted relationship with the gentler sex.  Not since the hideous “Starship Troopers” (1997) has the vagina dentata (that psychoanalytic trope of male horror) roared quite as ferociously as this gyno-gremlin.  It’s a shame that we see so much of the creature in the film’s latter half – have screenwriters Eric Heisserer and Ronald D. Moore learned nothing from Spielberg who intentionally left his man-eater half in the shadows to scare the bathing suits off us? – when the film’s most unnerving scene is also its least expensive:  every guy on base must subject himself to a dental exam and prove, since the alien spits out metals as it parasitically absorbs its victims, that he’s not the creature incognito by showing his fillings.  “What?” one member protests.  “So I’m the alien just because I floss?”  Open wide!

Perhaps the saving grace of this prequel to John Carpenter’s 1982 “The Thing” (itself a remake of Howard Hawks’s “The Thing” of 1951, inspired by the John W. Campbell story “Who Goes There”) is that a strong female has been dropped down in the center of it all.   That’s scream queen Mary Elizabeth Winstead (“Final Destination 3,” “Black Christmas”) as paleontologist Kate Lloyd recruited to the lunar landscape of Antarctica where an unidentified object, lodged in the ice for 10,000 years, has been unearthed by a team of Norwegians.  Kate, who is cleverly listening to Men at Work’s “Who Can it Be Now?” when called to action, is later caught star-gazing by the only other woman in this remote base-camp.  “I’ll never look at them the same way again,” Kate tells her short-lived friend.  What the team exhumes looks like a tarantula the size of an Escalade encased in ice.  It’s hard to believe that this sophisticated team of “experts” has only a power drill to break that ice and reach the specimen.  Once that happens – and yes, the team’s only black member, in the grand horror film tradition, is the first to leave the party to grab a six-pack stashed behind the Alien Popsicle – all hell breaks loose.  Because the creature can replicate itself on a cellular level, the remainder of “The Thing” is Dr. Kate repeatedly putting out fires. 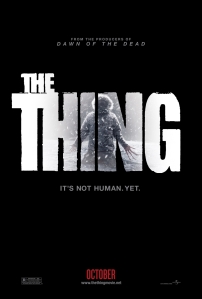 earlier version, which makes Dutch commercial director Matthijs van Heijningen’s version here something of a “prequel.”  When franchises such as this one can’t keep growing forward, they regress backwards.  Thus this “Thing” ends with a husky having escaped into the tundra and huskies, if you recall the original gross-out, get a raw deal in “The Thing” of ’82.  Apart from the gore, there was nothing really innovative about Carpenter’s version except A. Wilford Brimley (sans moustache) wielding an axe and shooting at a shaggy Kurt Russell.  Painfully derivative of the great “Alien” of 1979, Carpenter’s “The Thing” featured a no-thing that fixes itself on your face like a surgical mask, lodges in your abdomen only to explode in the worst form of indigestion known to man.  Just close your eyes at the film’s finale and think of its real inspiration: Sigourney Weaver, as the indomitable Ripley, walking the vertebrae-looking halls of the alien’s hideout, blowtorch in hand.  Now that’s a real gut-buster.