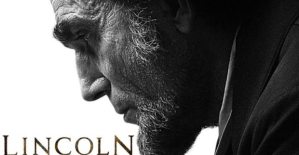 ABRAHAM LINCOLN ISN’T just a man but a monument.  Meanwhile, the movie inspired by his commitment to ending slavery and the Civil War is a mixed bag, a union, as it were, of playwright Tony Kushner’s talky script and Steven Spielberg’s love of spectacle.  What happens when you pair the intensely verbal with the intensely visual?  Sadly less than the sum of its parts, “Lincoln” is a mathematical equation as tricky to decode as “four score and seven years ago.”

On the plus side, there are the performances.  Daniel Day-Lewis is a titan of serious cinema, from “My Left Foot” to the best American film tragedy of the 2000s, “There Will Be Blood.”  This is a Method actor so focused and unfunny that he makes Anthony Hopkins look like Robin Williams.  He nails Lincoln’s reportedly reedy voice and effortless erudition. Reviewing “A Room with a View” back in 1985, Pauline Kael wrote of the actor: “In some scenes I wished the camera were at a more discreet distance from Day-Lewis, because you can see him acting and you’re too conscious of his black hair and mustache – you suspect he’s made up to be ascetic and all profile.” All these years later, Day-Lewis’ profile finally gets the close-up of its career.

On the surface, the casting of Sally Field as Mary Todd seems questionable given that the actress is eleven years D-Day’s senior, but dress any actor in Lincoln’s chin curtain beard and top-hat – and any actress in a hoop skirt and greasy hair curls – and their ages somehow find equilibrium.  The Lincolns’ youngest son Tad (Gulliver McGrath) is seen before the fireplace, studying pictures of slaves disfigured by their masters’ whips. Mary is agonized over the enlistment of her older son Robert (Joseph Gordon-Levitt) into the Union Army while, beyond the domestic, Republican abolitionist Thaddeus Stevens (Tommy Lee Jones) and Secretary of State William Seward (David Strathairn) are busy strategizing how to squash the Southern delegation.  “Lincoln,” at its heart, is not a biographical portrait but a study in political procedure. Seward has hired a group of Falstaffian fellows to cajole members of the House of Representations into passing anti-slavery legislation. The stand-out is W.N. Bilbo (a greasy James Spader) who brings some much-needed levity to “Lincoln” as he struts right through the front doors of the White House and delivers some deliciously salty language.

On the other hand, there are elements that subtract from “Lincoln,” or, at least, oppositional elements at work that make the film wobble like a house divided. Thanks to Kushner, “Lincoln,” inspired by Doris Kearns Goodwin’s “Team of Rivals,” limits its scope to the political wrangling involved in the passage of the Thirteenth Amendment, which outlawed slavery and put one more nail in the Confederate coffin.  As the famed 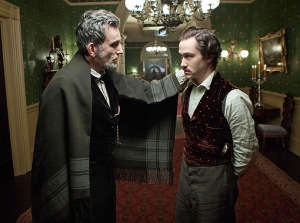 Civil War historian Bruce Catton wrote, “To save the Union the North had to destroy the Confederacy, and to destroy the Confederacy it had to destroy slavery.”  Given the misnomer of its title, one expects from “Lincoln” a sweeping biopic that begins with the sixteenth President as a young prodigy growing up in a cramped log-cabin on the Sinking Spring Farm in Kentucky and ending with a very bad night at the theatre. The maximalist Steven Spielberg is no doubt up to the task.  So, too, is Kushner, the Pulitzer prize-winner who co-wrote the screenplay for Spielberg’s 2005 “Munich” and, oh, just a little play called “Angels in America: A Gay Fantasia on National Themes.”  Whether Kushner and Spielberg are a match made in heaven should remain in question.  There’s a palpable tension between Spielberg’s love of the panoramic (i.e. the coast of Normandy, the Atlantic Ocean, space) and Kushner’s theatrical impulse to withdraw to the musty interiors of the White House and other Washingtonian halls of power. Regardless, “Lincoln” is destined to dominate next year’s Academy Awards; they might as well host the ceremony at the foot of Mount Rushmore.

Have no fear: there will be Oscars.