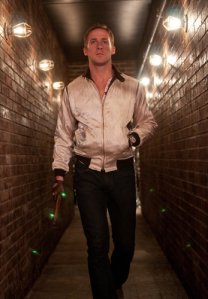 “Auto-matic for the People”

REVENGE, THEY SAY, is a dish best served cold.  Even colder when served at midnight in the mean streets of Los Angeles, or so “Drive” from Danish director Nicolas Winding Ref (“Bronson,” “Valhalla Rising”) would have us believe.

After the film’s anonymous protagonist (played by Ryan Gosling) sees his friends victimized by ruthless gangsters (Albert Brooks and Ron Perlman), he swiftly avenges their deaths in the film’s final twenty minutes, a stunning finale reminiscent of a very obvious influence here: the vigilante bloodbath known as “Taxi Driver” (1976).  But Gosling, fresh from the one-two punch of last year’s “Blue Valentine” and his comic turn in “Crazy Stupid Love,” smartly eschews a recycling of DeNiro to breathe new life into a young, marble-mouthed Brando, an über-cool Hollywood stunt driver by day and criminal getaway driver at night.

Before the pink cursive credits roll – oh yes, Mr. Ref is a stylist and 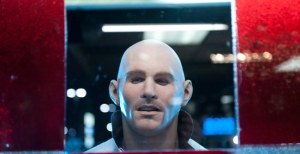 “Drive” is part music video, part urban nocturne (the best shots, in fact, of the City of Angels at night since Michael Mann’s “Collateral” of 2004) – the film’s opening demands that you fasten your seat belt as Gosling’s driver escapes the LAPD with two masked gunmen hiding in his backseat.  It’s not the high-speed car chase we’ve seen a thousand times before but a vehicular game of cat-and-mouse, a chess game on squealing rubber tires.

We get to know the driver’s softer side when, inside his Echo Park apartment building, he attracts his married mom of a neighbor, Irene (played by the always-restrained Carey Mulligan) and fills in for her  husband, who’s behind bars, and takes a special liking to Irene’s small son.  “What do you do?” Irene asks.  “I’m a driver,” Gosling replies.  “Like a limo driver?”  “No, like in the movies.”   There’s a brief period of paradise – the trio drives the city’s empty culverts, á la “Terminator 2” but slowly and in the sunshine – before Irene’s husband named Standard (Oscar Isaac) returns home.  That homecoming presages the fatal breakdown of virtually every relationship in the film: the driver’s bond with Bryan Cranston as a grease monkey known as Shannon, Standard’s with Mad Men’s Christina Hendricks as a double-dealing grifter, and Perlman’s with Brooks (playing against type as a diabolical ringleader).  When the driver doesn’t shake his hand, explaining “My hands are a little dirty,” Brooks shoots back: “So are mine.”

In keeping with the film noir of “Drive,” Ryan Gosling reveals what could be called the black leather interior of his complicated character.   It’s as sleek and stinging as the scorpion emblazoned on the back of his blood-stained jacket.  The pace of this little ultraviolent gem may not be fast and furious – at times, it’s closer to rush-hour traffic on the 101 – but “Drive” is sure to pick up more than a few passengers on its road to cult status.