“But the Providence of God has restored me – & may I be more fit to appear before him when I am summoned, than I shd have been now! Sick or Well, believe me ever yr attached friend.”

Austen was a literary lion who took pride in her creative works. She also knew, by the spring of 1817, that her death was imminent. Unmarried, she had lived fairly well in the cottage owned by her older brother, without whom she and her sister would have been forced to work as governesses, or worse, attendants to rich ladies at death’s door. Similarly, Austen’s widowed mother received no pension after her father’s death. As I stated in a previous post, without her novels, the greatest fiction-writer of the nineteenth century in England would have died dead-broke at the age of 41. In one of her final epistles above, Austen was still writing from the village of Chawton, later described by her nephew and the family biographer, James Edward-Austen Leigh in the following: “Chawton may be called the second, as well as the last home of Jane Austen…here she found a real home amongst her own people…Chawton must also be considered the place most closely connected with her career as a writer [though] she began to droop and wither away still in the prime of her life.” 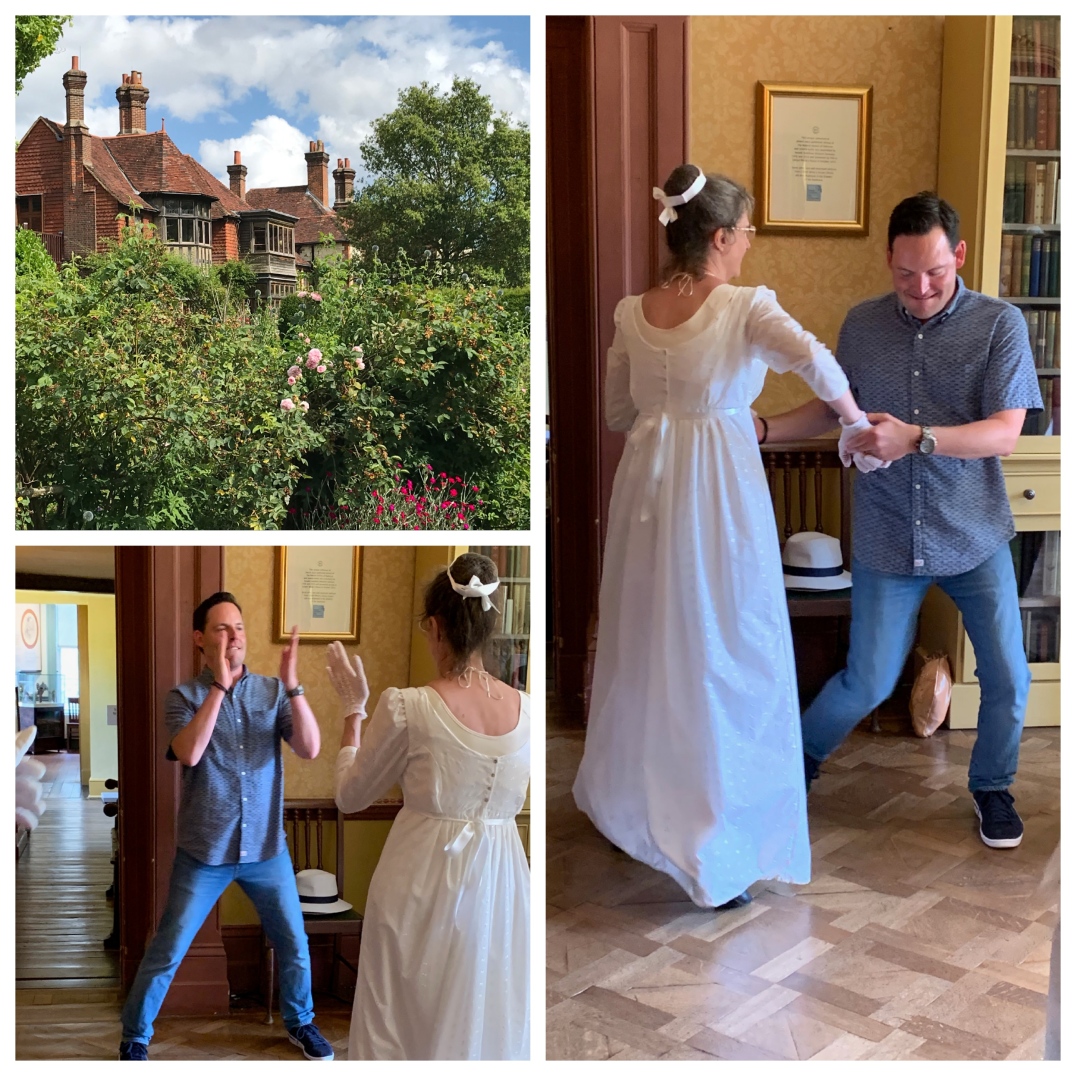 Speaking of the prime of one’s life, I went to the Gilbert White House Museum in Selborne, Hampshire over the weekend and, as you can see, I was swept up into a dance troupe. On the following day, I went to the car and bus rally in Alton, and I took a few pictures for my brother, Chris, who is a gear-head. “I drive my mini-Cooper and I’m feeling super duper,” rapped Madonna back in 2003. Check out the martini tray in the back of the 1961 Rolls-Roys Silver Cloud II. It’s amazing to think my grandparents would swill martinis and drive their kids home without seat belts or even head-rests. Not so safe or super-duper!

Austen made her will on the 27thof April and within a month, she bid her mother farewell for the final time and, with her beloved sister, set out for Winchester (once the capital of England) and lodged at 8 College Street. The novel Sanditon – soon to be a BBC miniseries – was left unfinished. You can see the yellow house below, close to the college, and the plague outside this now privately owned home. It’s eerie and fortuitous to write this final post on the day in which Austen was laid to rest inside Winchester Cathedral, one of the largest cathedrals in the world (constructed in 1079, consecrated 14 years later. “Winchester Cathedral, you’re bringing me down.” You can Spotify the Frank Sinatra version of that classic by the New Vaudeville Band in 1966. Not far from the famous cathedral, Benjamin Franklin composed some of his Autobiography and, in earlier times, the sardonic versifier Alexander Pope was expelled from school. That’s the west door to the cathedral in the top left below. 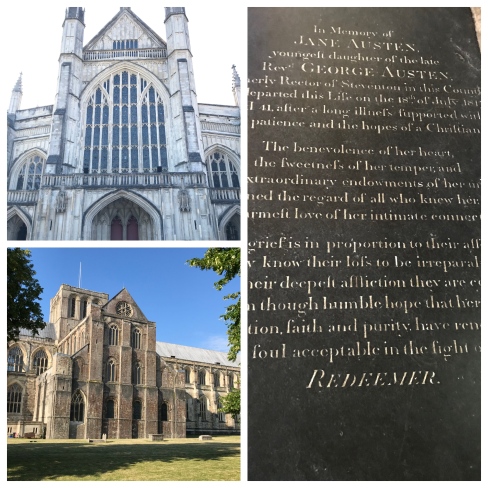 The sad fact is that her beloved sister Cassandra not only censored her letters but, according to their niece Caroline Austen, burned many of her correspondences. The reason being, as Austen scholar Deirdre Le Faye speculates, that either the author described the physical symptoms of her various illness a bit too graphically, or spoken ill of family members. (We can definitively rule of the possibility of any naked selfies of cheeky text messages.) Of course, we all wish someone had denied Cassandra the matches she needed. In the following century, Franz Kafka asked a friend to do the same and, thankfully, the friend ignored the request. Northanger Abbey and Persuasion (considered the most autumnal of her six romances, and composed during her mysterious illness) were published posthumously. After a traditional English breakfast like the one served on the High Street, I was just about ready to crawl into the Austen crypt with her. Shove over, sister! 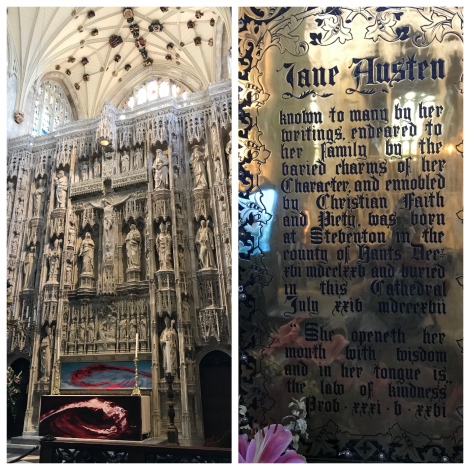 I met with a local historian, Jane Hurst, yesterday at the Curtis Museum in Alton and she added that male members of the family also cleared out the sister’s belongings, adding “And we all know how men clear out things!” Hurst added that the various theories as to what Austen actually died of “helps to sell books,” and she gleefully dismissed the idea that the wallpaper in the cottage was full of arsenic. “She would have had to lick the walls! What rubbish!”

The other theory is that Austen contracted bovine tuberculosis; consumption was a major killer in the Regency period. Just ask John Keats who nursed his brothers, contracted the disease from them, and knew his days were numbered when he coughed up blood. A villager in Chawton, John White, recalls Cassandra’s dog, Link, going to the great house for milk and the dog carrying it back around its neck. Is this the missing link? Austen complained of skin discoloration, headaches but, again, Cassandra may have hurt rather than helped matters if she excised the details of the mysterious illness from Austen’s letters. The reigning theory is still that Austen died of Addison’s disease, which is an adrenal insufficiency. The name of the disease, which occurs when the body doesn’t produce enough hormones, would not be coined until 1848 (by Thomas Addison), and John F. Kennedy was a famous sufferer. What a sad coincidence that Lou Gerrigh died of Lou Gehrig’s disease, right?

Speaking of sisters, here is what Cassandra wrote to their niece, Fanny Knight, from Winchester, just after Jane Austen’s death: “I have lost a treasure, such a Sister, such a friend as never can have been surpassed, – She was the sun of my life, the gilder of my pleasure, the soother of every sorrow, I had not thought concealed from her, & it is as if I had lost a part of myself.” But let’s give Austen the final word. According to that same letter, her sister recalls of their last days in Winchester:

“When I asked her if there was anything she wanted, her answer was she wanted nothing but death & some of her words were ‘God grand me patience, Pray for me Oh Pray for me.’”

And, for perhaps once in her short and prodigious life, the great wit spoke without a drop of irony or animadversion. For once, the great Jane Austen was dead serious about something.