“How to Train Your Princess”

THE PEDIGREE THAT is Pixar Animation Studios has never featured a female in a lead role.  Until now.  With its ginger-haired Merida (voiced by Kelly MacDonald), the studio responsible for such wonders as “Up,” “Wall-E,” and “Finding Nemo,” has finally joined the twenty-first century and paradoxically turned to tenth-century Scotland to tell its quasi-feminist tale, “Brave.”   Merida’s head of hair, by the way, may alone be worth the price of admission; it’s a mess of red-orange curls and bouncingly blends with the natural world around her.  In a dazzling set of sequences, the young princess rides the highlands on the back of her faithful Clydesdale Angus and when frustrated with family life inside the castle walls, she escapes to a stable to vent about her buffoonish father and imperious queen of a mother. They’re the DunBrochs, a boisterous family led by uber-clansman King Fergus (Billy Connolly), a bit too similar to the Viking patriarch in “How to Train Your Dragon,” and wife Elinor (Emma Thompson), a bit too droll to make “Brave” truly spellbinding. 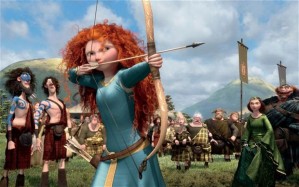 Behind-the-scenes at Pixar, a female at the helm may have rocked Pixar’s boat; much has been made of the fact that Brenda Chapman, who conceived of the original story, was replaced by Mark Andrews with whom she now only co-shares a directing credit.  That power-shift may be reflected in the somewhat mixed result: “Brave” had great potential – consider it the little feminist tale that could – but feels, perhaps like Chapman herself, hemmed in and restrained.  On one hand, Merida exerts her agency at an archery match and shows up all the boys eager for a betrothal.  “I am Merida, and I’ll be shooting for my own hand,” she declares, like an aspiring Katniss from “The Hunger Games.”  On the other, the dialogue written for her reeks of adolescent platitude and her sparring with ol’ mom sounds awfully quotidian for a film purportedly aiming for fantasy.  Her conflict with her mother is what drives her to an enchanted forest inhabited by a witch (Julie Walters) that offers her a life-altering spell.  As the witch, Julie Walters’ voice lights up the funniest scene in “Brave.” A close second is anytime Merida’s triplet brothers are spinning about like a trio of red-headed tornados.

Punctuality may be key to really enjoying “Brave”: the short film “La Luna” that precedes “Brave” is really over-the-moon.  What follows feels disappointingly closer to home.