A SURPLUS OF style, a dearth of drama, “Stoker” falls significantly short of its famous name.  The namesake of Park Chan-wook’s new film is Abraham “Bram” Stoker who was born in Dublin in 1847 during the Irish potato famine. He wouldn’t become a master of horror until he published his novel Dracula exactly fifty years later. Stoker

hardly invented the vampire legend – Byron’s private doctor, John Polidori, beat him to the punch with The Vampyre, his contribution to the same ghost-telling contest that inspired Mary Shelley’s Frankenstein in 1816.  What Stoker did was package a mixture of vampirism and eroticism that Victorians could truly sink their teeth into: an American edition of Dracula followed its English publication, and an abridged edition appeared in 1901.

The film “Stoker,” written by actor-screenwriter Wentworth Miller, has all of the goriness of Dracula but it moves more at a zombie’s pace than a real bloodsucker’s.  It centers around a melancholic girl named India Stoker (Mia Wasikowska) in what is essentially Hamlet from a daughter’s perspective: India’s father Richard (Dermot Mulroney) has died a

mysterious death upstate and his dashing brother Charlie (Matthew Goode) suddenly appears on the scene where he flirts with his widowed sister-in-law Evelyn Stoker.  She’s played by Nicole Kidman, who had long chosen risky roles (“Eyes Wide Shut,” “Birth”), and Wasikowska could be seen as something of her Aussie protégé (“Albert Nobbs,” “The Kids Are All Right”).  Over the course of “Stoker,” she has to transform from a shrinking violet into shrieking and violent and it’s a tour-de-force performance inasmuch as she appears practically possessed.  “We don’t need to be friends,” India tells her uncle coldly, “We’re family.”  At first, it appears as if Uncle Charlie is the evil influence until we sense that India is far from a passive receptor but something truly wicked.  She goes from girl to gorgon.

The shower scene in which India masturbates to memories of a recent killing is laughable – stupid even, but Wasikowska never wavers in her eerie embodiment of a girl metamorphosing into something horrible.  It’s a bloodbath in every sense of the 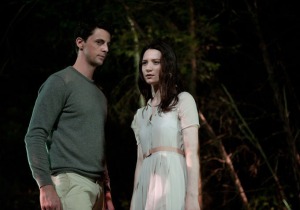 word.  South Korean director Park is best known for his “vengeance trilogy” (including “Oldboy) and his heavy hand, stylistically speaking, strangles the film, both in terms of timing – the opening credits needlessly hiccup and reset themselves – and storytelling.  What exactly is the story of “Stoker” and what relation does it bear at all to vampirism?  We live in the age of the vampire (“True Blood,” “Twilight,” “Let Me In,” et al) but Park’s family gothic adds nothing to the lore. It only takes, and in the process, drains your time and your patience. 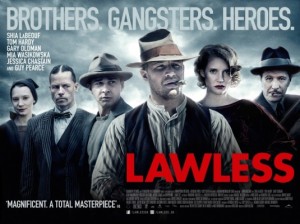 A FAMILY THAT bootlegs together stays together, right?  At least that was the motto of the Bondurant brothers, a feisty frat servin’ up moonshine in Franklin County, Virginia, and the centerpiece of John Hillcoat’s new crime drama “Lawless.”  Benoit Delhomme’s camerawork, pitched to a dusty brown, and the twang of Lucinda Williams, effectively transport us to those dusty days of the Depression.  The year is 1931 and the major players are the hard-bitten Forrest (Tom Hardy), war veteran Howard (Jason Clarke) and baby brother Jack (a beefed-up Shia LaBeouf).  With the help of Cricket, their disabled friend played by Dane DeHaan, the Bondurants operate a successful watering hole in the back hills of Apalachia.

Jack has his eye on Bertha (Mia Wasikowska), a preacher’s daughter just dying for a ride in his flashy convertible and the intoxications of Jack’s outlaw image.  The spectacular but sidelined Jessica Chastain (“The Help,” “Take Shelter”) plays Maggie “Red” Beauford, a former dancer turned barmaid who helps the brothers sling their white lightning.   They all maintain amicable connections with the authorities of Franklin who look the other way while taking a few sips themselves.

That is until Chicago lawman Charlie Rakes (an eyebrow-less Guy Pearce) arrives on the scene to demolish the boys’ American pastoral and false sense of invincibility.  Who kicks a man when he’s down?  Special Deputy Rakes does and viciously so.  The locals murmur that Rakes wears perfume and as he gores Jack across his own backyard, he worries that he’ll bloody his crisp pinstripe suit and swimming cap of pomaded hair.  Jack recovers, tensions mount, and during a first date gone terribly wrong, Bertha happily trades in her head scarf and church-going clothes for the yellow, strawberry-patterned dress Jack has brought her.  All around them, meanwhile, Rakes and his corrupt cronies are bearing down.

The consummate charmer, LaBeouf is known for his effortless chemistry with female

costars and though he (and costar Hardy) are in desperate need of dialect coaching, “Lawless” broadens both actors’ likability.  More so than the chirpy LaBeouf, Hardy croaks his lines as he did as the dog-muzzled Bane in “The Dark Knight Rises.”  His dialect coach had to have been a bullfrog with a double tracheotomy.  More problematic than the performances, the script is from Australian rocker Nick Cave, known for his violently balladry, and based on “The Wettest County in the World” by the Bondurant brothers’ descendant, Matt Bondurant.

“Lawless” is a scrambled egg of a script.  One particular sequence, which move from Forrest’s throat being cut in the dirt, an offscreen sexual assault on Maggie, to the aftermath of both these horrors, is as disjointed as the surrounding scenes.  Gary Oldman, as Floyd Banner, even shows his villainish face, but he remains, puzzlingly so, on the margins of the Cave’s plotline.  Pearce’s Rakes is more than enough villain to go around, but the role written for him is a despicable cliché: a sadistic fop who,

aside from hating to be called out for his effeminacy, has no real motivation.  You half expect him to victimize Cricket in other ways when he finally gets his manicured hands on him in the woods, and the punishment he has coming to him by the vengeful Bondurants, is both predictable and lacking in dramatic purpose.   The bloody fate that Deputy Rakes faces should have been staged in a more intimate fashion with dialogue rather than just bullets exchanged.

Thus “Lawless” ends with another familiar feeling:  Chicago, it’s a hell of a town.