“With ships and sailors she felt herself at home.” – James Edward Austen-Leigh (JA’s nephew and the family biographer, 1870)

How much is that Austen in the window? The one with the waggly (six) tales? This is Austen (some of Alton’s bread-and-butter) painted rather inexplicably inside a door frame. Kiss it and you’ll be lead off in handcuffs. 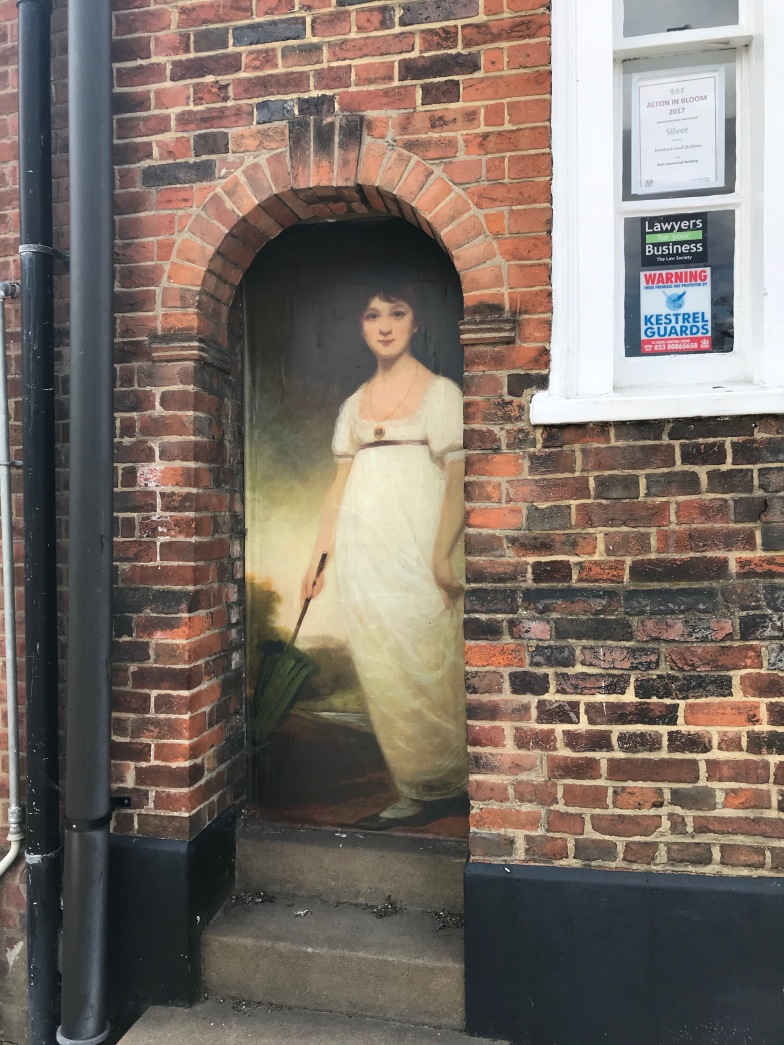 This childhood image of the author is unauthenticated and like so much of her short life blurry at best. As a result, there are the purist Austenites who quote her letters because that’s the “truth” whereas there are the fiction-lovers, like me, who claim that art outlives all things and matters most. But we are all projecting ourselves onto the blank slate that was Austen, the woman, daughter, sister, and friend…but above all else, a true artist.

All that we know for certain is that, and this may sound slightly daft, I truly feel her presence here in the countryside. Her fiction is a gateway into nineteenth-century rural life. A volunteer at Chawton House explained that the ha-ha (funny term, eh?) is a landscaping technique that keeps the livestock out but doesn’t disrupt the vista from the house. In essence, you create a short, gated drop that animals can’t cross and close to, on the grounds of Chawton, what’s termed the wilderness (a wooded spot deliberately kept uncultivated and wild.) “I made it through the wilderness, somehow I made it through…” (know the lyric? I think you do.) 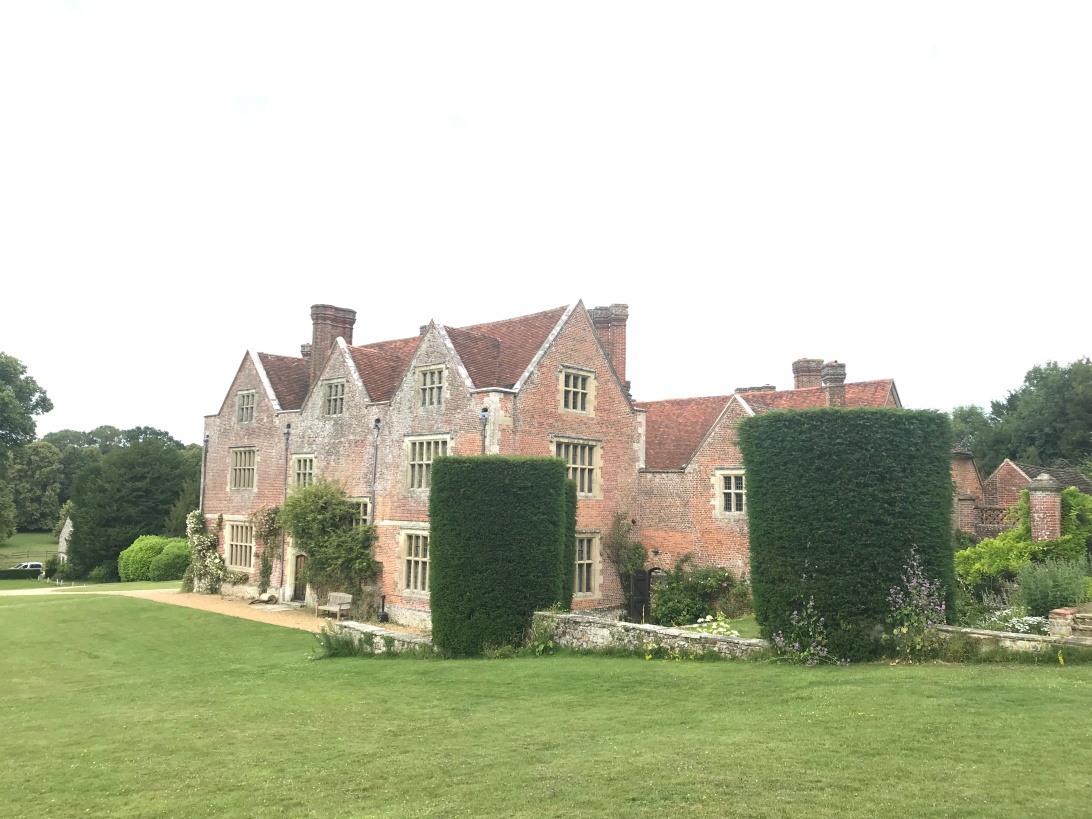 After lunch, I walked in the wilderness to the south of Chawton House and was suddenly overcome by something quite inexplicable. It was the genius loci, the extraordinary gift that Austen gave us through her fiction, which, when properly read, can be a kind of secular Bible of rights and wrongs, an outcrop of the rural countryside of Hampshire that grew her creative excellence. What a gift for dialogue, plot, pacing, and overall brilliance! “Brill,” or so says a friend at Chawton, as short for the British go-to: “Brilliant!”

“She’s smiling on you,” said the secretary for the Jane Austen Society on Saturday when she attributed the cool, pleasant weather so far to something far more supernatural. Fanny Price, the heroine of Austen’s Mansfield Park, was “almost over-powered with gratitude” – ah yes, being grateful can be as overpowering as feeling loved. My punchiness could be the finally-fading jet-lag; I get a bit weepy when I’m overtired. Then again, literature-lovers tend to be a squishy sort of people.

I’m on foot here in Austenland – the Disneyland for Brit Lit twits – for one major reason:

My driving is rubbish (see, the English colloquialisms are sinking in) and I know how to turn a page better than I do cross the street, especially when everything is backwards. The most valuable lesson I learned back in 1999, when I spent my junior year of college, at Oxford didn’t take place amongst the derisive dons but in the car of my host parents in Herefordshire. They were your classic Britons, what with their figurines of Princess Diana and Florence Nightingale in her china hutch and the pinkish husband in pleated plants who wanted to talk football with me until he realized my knowledge is limited to the arts, oh and DIY anesthesiology (an innocent but illegal hobby of mine). On our drive into town, I felt instantly uneasy being on the “wrong” side of the road and said so, but my hostess replied: “It’s not wrong, darling. It’s just different.” Man, is there a greater lesson in life than those seven words? Just because you don’t agree with or understand something strange to you does not mean it’s bad or wrong; it’s just different. All morality departs from that simple starting-point. Here’s Austen, my life-coach as of late: “My dear child, there must be a little imagination here…you see but half” (Mansfield Park). Translation? We humans, innately selfish and stupid, rarely grasp the big picture: too stuck in ourselves. But you’re reading a stranger’s words and reading is always an adventure into the mind of the other, so you’re already on your way!

Now that I think of it: everything I learned at Oxford was really self-taught. You write long, well-researched essays that you read aloud, in a tutorial, to a tutor who is half-listening and thinking of his/her own work. Is that teaching, really? Man dreams alone and he learns alone. Yes, I’ve had some superb teachers but, as the old saying goes, only when the pupil is ready does his teacher appear.

The Jane Austen House Museum asked me to help in the garden (see below). I was stung, swatted at by a cat, and severely under-caffeinated but all in a day’s work. The cat’s name is Marmite. He local and a sign warns visitors that he can bite. Why, then, on earth does Marmite hang around the place where over 100+ tourists visit a day? 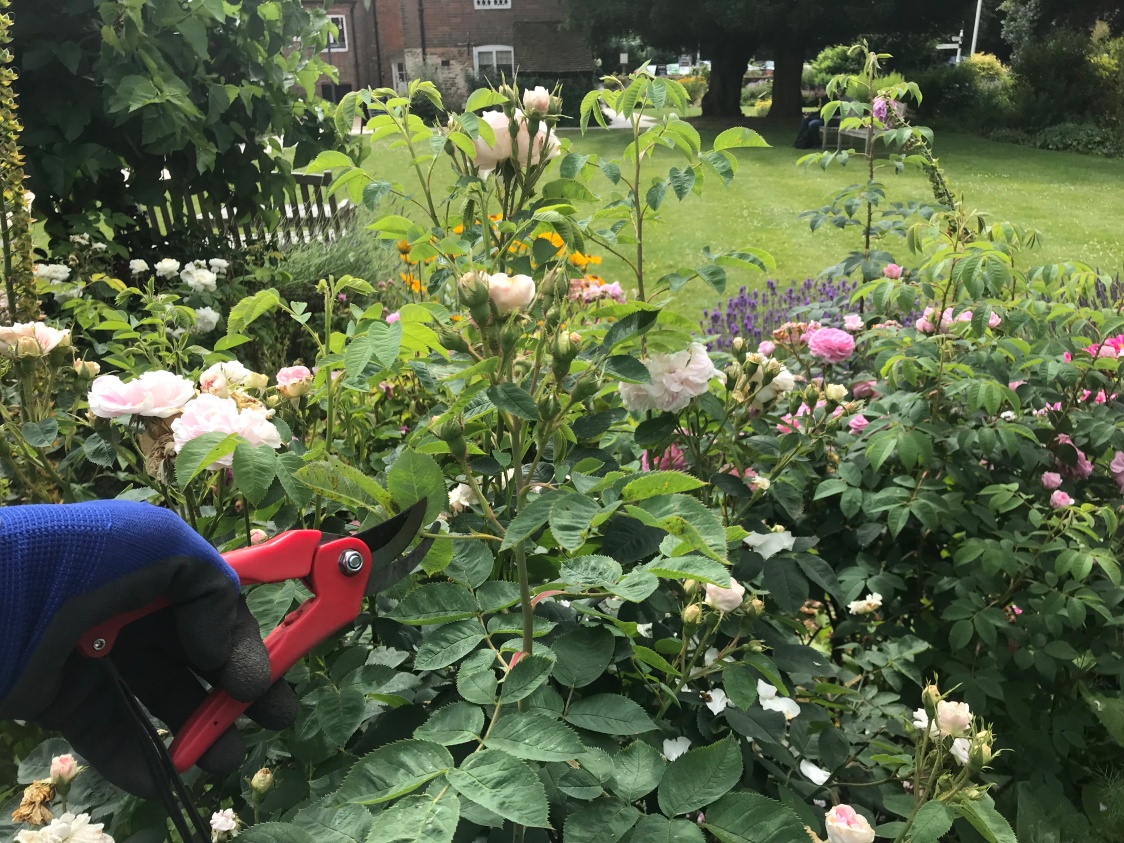 This is why I was oh so grateful to take not one but two field trips over the weekend. My first was guided by the insanely knowledgeable secretary of the JAS. I learned that I am the first male recipient of this grant. Breaking the Austen ceiling here in Hampshire, baby: getting’ Janey with it! See below for our sundial of sites: Farringdon (a village close to Chawton) and the redbrick home, privately owned today, of the Lefroy family. Born in Limerick, Ireland, Tom Lefroy briefly courted Jane – she would have walked in and out of that front door, and you don’t need the film “Becoming Jane” (2007) to Hollywoodize the matter – but neither were wealthy and it kind of, well, fizzled. Remember that people didn’t marry because they swiped right and found his/her soul mate but because the match was somehow advantageous for one, or both, party and for his/her family.  It was 1796 and the couple, one year apart in age, were in newly twenty-somethings. There was no Thank You, Next.

Below are retirement homes available only here in Alton, so if you’re going a bit gaga, the time to buy is now! Apparently, the Jane Austen House Museum had to prevent people from spreading their ashes on the grounds without permission. I don’t take sugar and milk and my tea, and I certainly don’t take human cremains. Ha-choo! Looking for a retirement home in Alton? Only six units left, so act fast. When Winston Churchill had the flu, his daughter Sarah read Pride and Prejudice to him, which he quite enjoyed: “What calm people!” he remarked. That could be you at Austen Place someday. 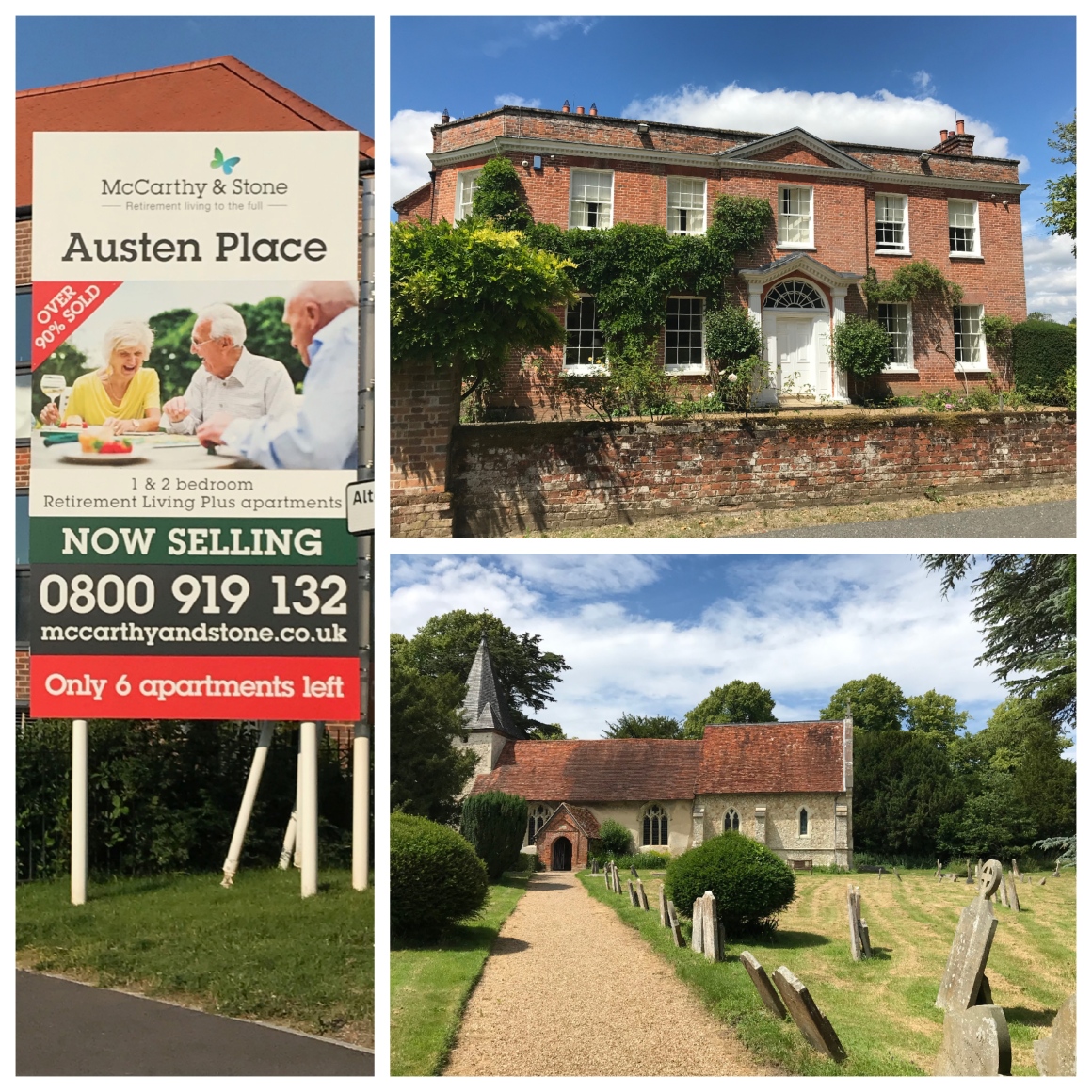 It’s too bad Lefroy didn’t write the account down and detail the memory. Instead, he told a relative before he died that he had a boyhood crush on the Jane Austen. By the time of Lefroy’s death in 1869, more than fifty years after her death at 41, she had gained posthumous recognition and he had to say something about his puppy-love. (When I wrap up this one-moth research residence, I’ll report on her mysterious death and fatal illness.) We wouldn’t even be saying Lefroy’s name, or watching a film like Becoming Jane, had he not crossed paths with the immemorial ironist. Her only second proposal, as is well known, was accepted but, after she slept on it, rejected the day after. Thank you, Next Novel.

The second guide took to me to Portsmouth, a coastal city entirely defined by defenses. Fortress Portsmouth, really. Both of Austen’s youngest brothers, Francis and Charles, were in the navy. I heard twenty-five ways of saying the same thing: Portsmouth had to defend itself from a French invasion and, thus, forts built up north (if and when a powerful little potentate named Napoleon entered England through its east and west coasts) and a thousand ways that the English wished to slow or full-stop invaders through its ports north of the Isle of Wight. I toured the battleship of Lord Horatio Nelson (1758-1805), the HSM Victory, and saw the very spot where the sea captain fell after taking a shot across the bow from the French. Dying, he asked Cpt. Hardy to kiss him, a tale that made the already awkward English even more uncomfortable, so they made up the idea that Nelson said “Kismet” (Turkish for “fate”). At this death, Lord Nelson was blind in one eye and missing an arm from battle. He gave his body and soul to his native England. So, give the man a kiss, would you?!? Sometimes the truth is queerer than fiction.

Nelson’s body was preserved in a barrel of brandy and returned to London for a ceremonial funeral. That’s how I travel to and fro work. Learned lots of fun naval facts in Portsmouth: the “powder monkeys” were the English boys who supplied the cannon powder; “one square meal” comes from the wooden square plate that every seaman and midshipman had for their meal (in addition to a gallon of beer — safer than water at sea); “cat out-of-the-bag” comes from the flogging whip used on Navy men who broke the rules. Tight ship, indeed. 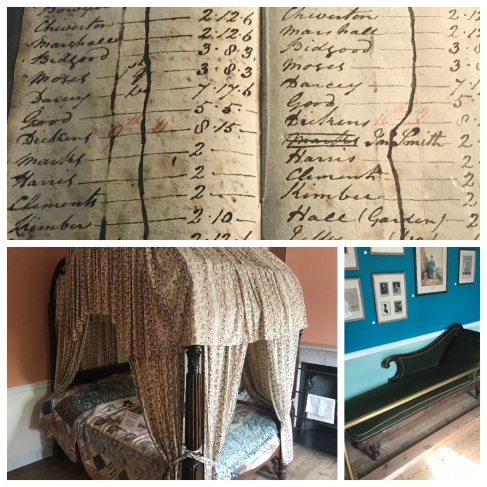 Above is the birth and death place of a still underrated and relatively unknown novelist named Charles Dickens (1812-1870). Note (up top) the family name in the red  as his father John (a pay officer on the Portsmouth dockyard) was absolute shit with money and landed the whole fam in debtor’s prison. Charles, meanwhile, went from rags to riches and is now synonymous with the industry that is Christmastime.

Dickens died of stroke at his home Gad’s Hill in Kent and the chaise is so stiff that stroke is the only other option, after a terrible neck-ache. I was surprised to learn that tabacco (prior to Dickens’ stroke) was sniffed rather smoked: put on the back of the hand and snorted like a line of cocaine. Hardcore! But what is literature, after all, but yet another powerful intoxicant and distraction from the dreary routine that is life? (Don’t answer that; it’s rhetorical, so just nod your head.) And on that depressing note, I bid you adieu! Now kiss me, Hardy, or is it hardily? Awww Heck, what’s my password for Netflix?