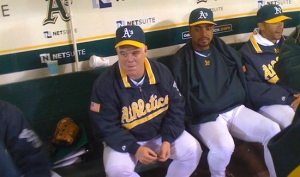 “HOW CAN  YOU not be romantic about baseball?” queries Brad Pitt, as the wildcard GM of the Oakland Athletics, in this talky new sports drama called “Moneyball.”  That loquaciousness, and the surprising fact that most of the film’s action takes place not on the diamond but on conference tables, is due in large part to the snap-crackle-pop of screenwriter Aaron Sorkin (sharing the credit with Steven Zaillian from a story by Stan Chervin and book, fully entitled Moneyball: The Art of Winning an Unfair Game, by Michael Lewis of “The Blind Side”).

It’s an ironic but endearing question from Billy Beane late in “Moneyball” because it was sheer number-crunching and player analysis not romantic notions of luck and discipline that led the A’s from a 5-3 loss to the pinstripes out East, in the Division Series of 2001, to an astounding comeback in the form of twenty consecutive wins years later.  It was Beane’s bean-counting that put the A’s back on the A-list of pro-baseball.  The grand notion of “Moneyball” is that when paradise is lost, it’s not regained but rebuilt from the ground-up. 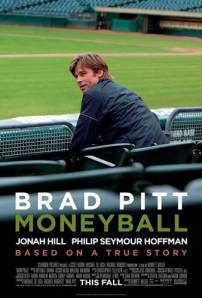 After Beane loses outfielder Johnny Damon and heavy-hitter Jason Giambi to bigger and better teams, he likens his own to one big organ donor, farming out the heart and kidneys of the A’s to its competition.  But he swiftly rebuilds, much to the clubhouse’s chagrin, after enlisting the support of a Yale-educated economist named Peter Brand (played by the koala-bodied Jonah Hill).  (The brainy basis for Brand is Paul DePodesta, currently the VP for amateur scouting for the NY Mets; he and Beane theorized that walks are as important as home runs and relied on older and even injured players, and their patience at the bat, to succeed.  The script deftly introduces us to Scott Hatteberg, whose career as a catcher for the Boston Red Sox ended with a nerve injury, only to bring him back at a key and victorious moment.)   With aphorisms like “Baseball thinking is medieval” and “Pitches are like blackjack,” Brand helps Beane turn the game into a casino floor.  This approach is not without its detractors: an outraged scout who curses Beane out and the great Philip Seymour Hoffman as the A’s manager, Art Howe.  Seeing Hoffman, in a buzz-cut and starched white baseball jersey, is alone worth the price of admission.

“Moneyball” is entirely dependent on the work of two non-rookies: Sorkin’s script and Pitt’s intense focus. Pitt’s embodiment of Beane is the sine qua non of “Moneyball”; the film is really unthinkable without his cool grace under fire, when hiring and firing irate underlings, and his tenderness when interacting with daughter Casey (a guitar-strumming Kerris Dorsey).  An awkward scene in which Beane is forced to make small-talk with ex-wife (Robin Penn Wright) and her new husband while waiting for Casey to return home from a party provides some much-need pathos.

Sorkin, meanwhile, is the modern master of esoterica in light of the Beltway banter of “The West Wing,” the military and techno-politics of “A Few Good Men” and “The Social Network” (respectively) and here, in “Moneyball,” he and Zaillian reveal that major league baseball is not a far cry from Washington: money talks and walks in both realms.  Is it any wonder that another Yale grad, but just barely, George W. Bush, made that short step from the Texas Rangers to deranged foreign policy?

In the play-ball tradition of “The Natural” and “Hoosiers,” sports films that smartly transcend the track and field for something more meaningful, “Moneyball” flies because its pitch is way inside.