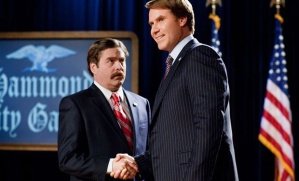 THE PHRASE “DIRTY POLITICS” acquires a new meaning in the amusing but ultimately frivolous “The Campaign,” directed by Jay Roach (“Meet the Parents”) based on a story by Adam McKay (“Anchorman,” “Talladega Nights”).  The film is a veritable raunch-o-rama that makes strange bedfellows of the already strange Zack Galifianakis and Will Ferrell.  No one will be surprised to learn that they have great comedic chemistry together though the script is cynical and ultimately too silly to really leave a black-and-blue. 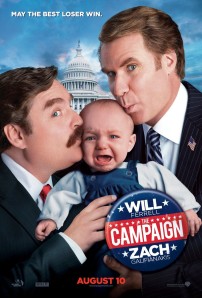 off as congressional candidates in North Carolina and along the way, poke fun at the emptiness of political rhetoric in America today – Brady runs on the platform “America, Jesus, Freedom” but confesses off-stage that he doesn’t believe it much less know what it means – while satirizing the hypocrisies of campaigning and the deep pockets that make it all possible.  Pulling the strings, and downing brandy after brandy, are the film’s villains, John Lithgow and Dan Aykroyd, who, as Glenn and Wade Motch, mirror the real-life Koch brothers, the Tea-partying billionaires who abominate President Obama.  There’s also Dylan McDermott as the Motch’s errand boy and, in Brady’s bunch, Jason Sudeikis, as a campaign strategist.

The problem is that “The Campaign” doesn’t exactly rise – or is it sink? – to the level of great satire; its best bits involve what you have likely already seen in the previews (Ferrell taking an accidental swing at a baby on the campaign trail) and Sudeikis coaching his boss through a recitation of the Lord’s Prayer, which Ferrell botches badly but with brilliance.  A crazy-eyed Ferrell is little more than a haircut here and the Bush impersonation he does so well distracts. 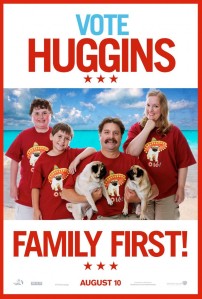 As Huggins, the great Galifianakis gives us another of his effeminate manchild personae – he does essentially the same shtick in the road-trip comedy “Due Date” – that makes you wonder if he is parodying gay men for cheap laughs or, more subversively, playing it “straight” to ultimately undo masculine gender norms.  [New York Times film critic A.O. Scott raises the question in his review, asserting: “Marty is squeaky-voiced, easily flustered and just a wife (Sarah Baker) and two sons (Grant Goodman and Kya Haywood) away from being an egregious gay stereotype” (8/10/12).]   You half expect his macho enemy, Cam Brady, to out Galifianakis’ character and though that doesn’t happen, it is hard to know what Galifianakis wished to achieve with this queer performance and whether he is sending a knowing wink-wink to the audience.  The joke could be that the American mainstream demands a put-on masculinity.  “The Hangover” remains the apotheosis of man-cinema and yet no one talks about how the character of Alan deviates from the hetero-dullness of the typical buddy film.  The rest is simple: Galifianakis is the most dynamic comic actor of our time with the hardest working facial hair in show business.

If not for him, however, and Sarah Baker as his bewildered wife, “The Campaign” might even further lose the race.  It could have been a contender – and it packs in the laughs, for sure – but winds up as something of a minority leader.