THE MUCH-ANTICIPATED screen version of “The Hunger Games” comes with baggage.  A lot of baggage, in fact: more than twenty million readers (and growing) and that perennially impossible pressure of bringing a beloved book to life on screen.  Let’s face it: you can’t appear as if you love the book if you love the movie as well.  But what’s to rave about here?  “The Hunger Games” begins and ends not with a bang but with a whimper, and that’s the surprising deficiency in Gary Ross’s screen retool of Suzanne Collins’ best-selling dystopic triology with this cheery premise: a futuristic Orwellian autocracy in which minors are marched into a televised fights-to-the-death.  Call it “Keeping up with the Kill-dash-ians.”  Ninety million dollars later, not to mention a costume department that resembles the offspring of Tim Burton and Marie Antoinette, and we have Part 1 of “The Hunger Games,” but it’s a snooze and you’re lying if you weren’t left a little hungry for just a little more gaming and a lot less exposition. 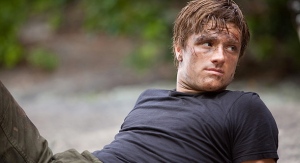 “Battle Royale,” but there are influences even more obvious: Shirley Jackson’s “The Lottery” and Stephen King’s sci-fi novel, “The Running Man” (later a film starring Schwarzeneggar), in which the clairvoyant King, who saw, back in 1982, where reality-TV was headed, put game-show contestants in a death match.  As Collins’ 16-year old heroine Katniss Everdeen, Jennifer Lawrence (Oscar-nominated for “Winter’s Bone”) has already been call bland and lifeless in the role.  Not so.  The leitmotif of The Hunger Games is containment – segregation, really, as in the district-ization of this future nightmare-socity – and Lawrence gives a restrained, rather contained performance, focused and somber.  Some of the first images of Lawrence are powerful: like a Diana in pigtails, she stands inside in a verdant forest, hunting bow in hand.  Of course, the huntress becomes the hunted as she joins twenty-three other so-called “tributes” to inhabit a vast televised landscape, replete with genetically engineered hornets and man-eating dogs the size of VW bugs, compliments of reality-show producer Seneca Crane (Wes Bentley) and blue-skinned Caesar Flickerman (Stanley Tucci) as the games’ slimy talk-show host.

Regardless, the supporting cast contains some delightful stand-outs: the always-entertaining Elizabeth Banks who cites Joel Grey in “Cabaret” as the inspiration behind her Effie Trinket and Josh Hutcherson (“The Kids Are Alright”) as the passive Peeta Mellark.  Two others are severely miscast: a wooden Lenny Kravitz as Cinna and a Woody (Harrelson) as Haymitch Abernathy.  Apparently, the party every night during shooting was in Kravitz’s trailer but he brings little of that fun to the screen.  And the fact that two of the audience members in my row were asleep two hours in – and it was a 12:15 screening! – speaks to the film’s snail’s-pace.  Simon “Slumdog Millionare” Beaufoy has adapted the second book “Catching Fire” for the screen – production begins this September – and let’s hope he can give the plot the Bollywood bop it deserves.

A sinister Donald Sutherland, whose white beard is combed into a ghostly mask, plays President Snow and in the film’s final scene, we see him assessing the winners of the Games and perhaps determining what’s to come.  “Contain it,” he tells Seneca earlier in the film.  Still, what are we to make of that last look at the games’ sole survivors?  It spells sequel, but how exactly?  What’s left uncontained?

With the next three films in the works and fans ravenous for more – that’s right, Hollywood will split the third book into two films to play the game some more – it’s safe to say the Kat Fight will continue.  Let’s hope it can overcome the low blood sugar that slows down this first installment.