Before we get started, what in the photo below doesn’t belong?

What we know for certain is that Austen was a clergyman’s daughter (and brother) and did not wear her faith on her sleeve. Nevertheless, the family attended church not once but twice on Sundays and read from the Book of Common Prayer (with its morning and evening prayers). The great biographer Claire Tomalin notes, in her fine biography (from 1997), that while Austen came from a devoutly Anglican family, there are very few scenes that actually take place in a church in her fiction. Once she realizes the error of her ways, Marianne Dashwood declares the following toward the end of Sense and Sensibility: “But it shall be regulated, it shall be checked by religion, by reason, by constant employment.” Easier said than done, and Austen scholars tend to agree that the line is under-motivated, meaning, not really earned. Marianne is merely paying her more sensible sister Elinor (and the reader) lip-service.

As for Sunday services, the church close to the author’s heart was Saint Nicholas, which was destroyed by fire, in 1871, more than fifty years after she died. The installation of a new heating unit caused a varnished dado to go up in flames. Talk about a backfire. The church that Austen worshipped in probably looked much different pre-restoration; regardless, in her day, she attended the baptisms of the Digweed and Clement children (family friends). Just prior to her death, her brother Henry was made Curate of Chawton. Inside Saint Nicholas (dating to 1270), you will find a three-paneled reredos, in an oak frame, depicting the Crucifixion. I’m of the opinion that the manor-house, Chawton, just up the driveway from St. Nick provided the inspiration for Mansfield Park. Inside there are eleven stained glass windows and a memorial for Lady Bradford whose husband, Major Bradford, lost his arm to a man-eating tiger.

The novel’s heroine, Fanny, described as “well-principled and religious,” winds up marrying her first cousin Edmund, a chatty clergyman. Students are usually discomforted by the fact that (1) the happily-ever-after ending involves two cousins tying the knot and, more troublingly, that (2) Fanny and Edmund are raised as siblings from the age of ten onward. If you want to go there, cousin-coupling wasn’t unheard of, especially amongst the landed gentry who didn’t leave their own social class, but if it had to happen, families preferred that the bride and groom were not of the same matrilineal line. In other words, uterine incest (or a couple whose mothers are sisters) was best to be avoided. Even nineteenth-century people sensed that inbreeding could result in genetic abnormalities. Ah well, it’s all relative.

Speaking of Henry Austen, below is the memorial plaque for Austen found in Winchester Cathedral. Famously it makes no mention of her authorship and it’s believed that Henry, the most pious of her older brothers, had to amplify her identity as a Christian in order to secure her a spot in the cathedral. I’ll spare you the details but in the summer heat of 1817, a body would not be returned to its original chapel. For this reason, Austen is interred in Winchester while the two Cassandras (her mother and sister) are buried in the St. Nicholas churchyard. Later, in 1923, prayers by Austen were published though, again, the authorship is sometimes questioned. Below is my awkward selfie taken in Winchester. I’m going to delay the details of my pilgrimage to the grave until my final post next week, however. 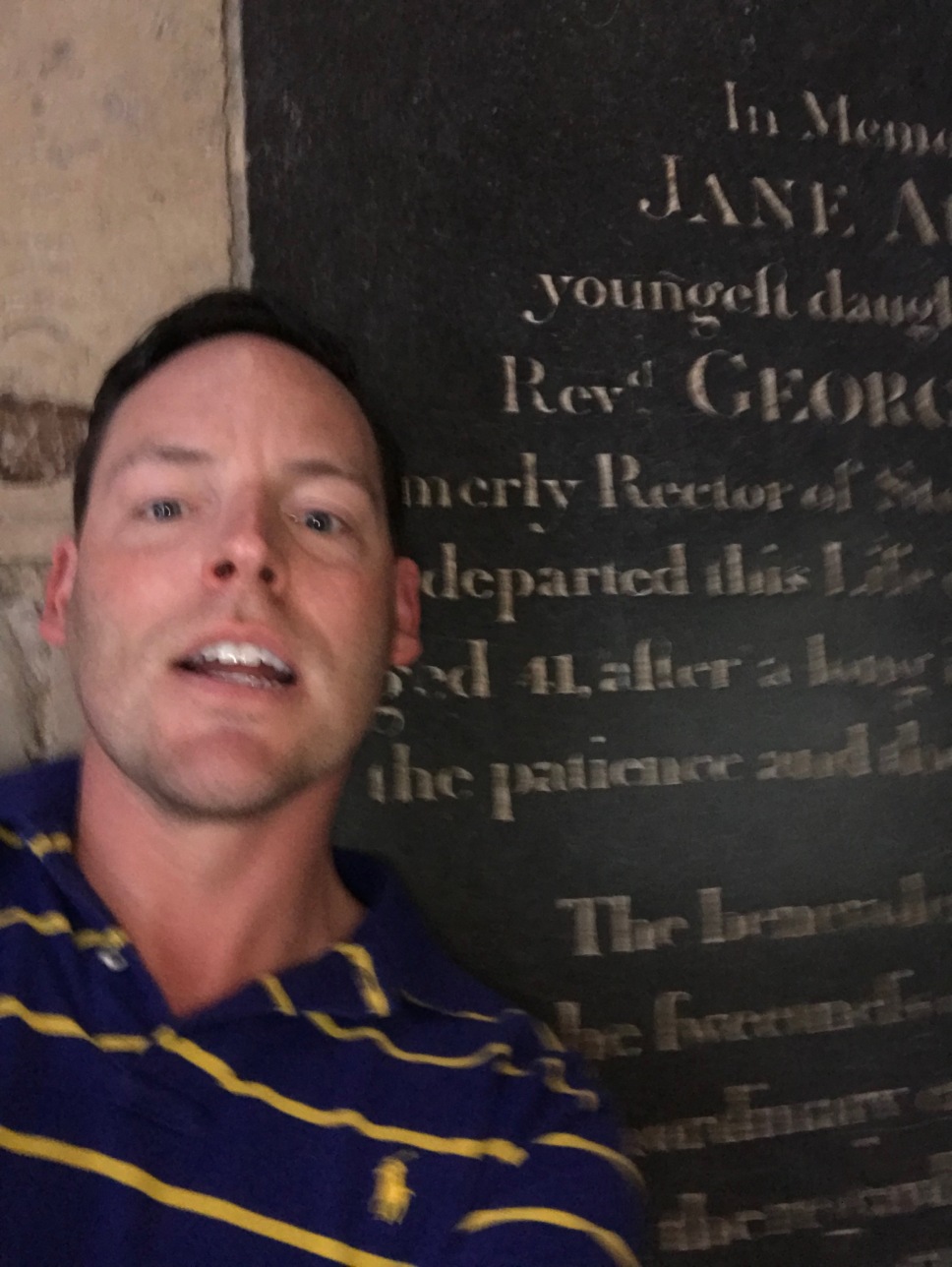 Yesterday I walked from South Warnborough to the quiet hamlet of Upton Grey. All of the animals below give you an indication of just how rural this area is. That being said, a few Mercedes zipped by on the country road, so it’s not exactly slumming it.

“Upton” is derived from the Anglo-Saxon for “homestead upon the hill.” The church, Saint Mary’s, has been there for over a millennium! The Norman arch and knave date back to 1120. Note the “King & Country” dedication. There’s a fine memorial for a nineteenth-year-old lieutenant John Henry Beaufoy who fell, in 1809, at the Battle of Talavera in Spain. Over the past month, I’ve been delighted to find that village parishes are left open. The bigger church here in Alton, St. Lawrence, still has a damaged front door from the Civil War in the 1600s. 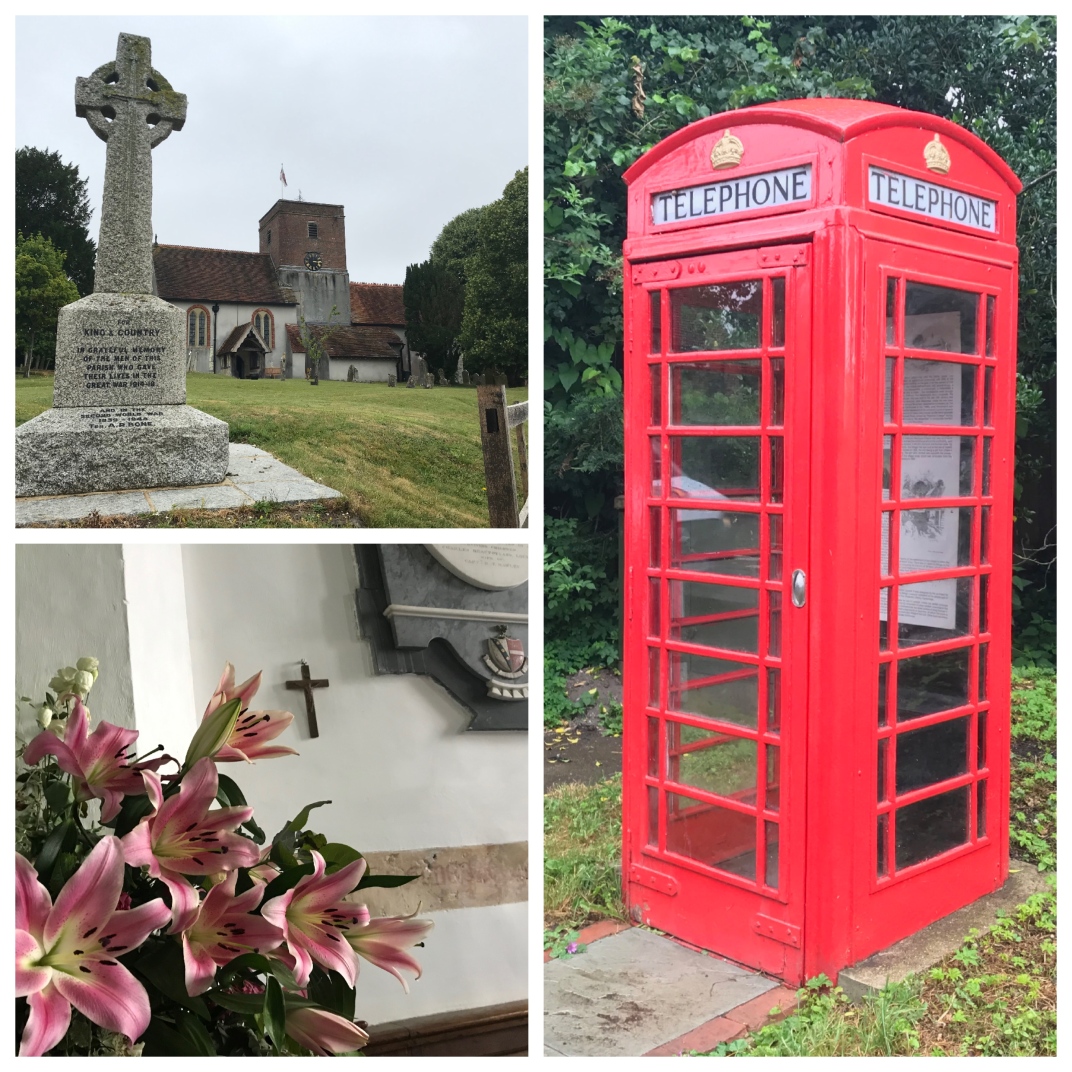